Get Your Autobots Here: General Motors to Offer Bumblebee Camaro

For $995, Chevrolet will turn your 2010 Camaro into a movie star. Just don't expect sci-fi performance as well 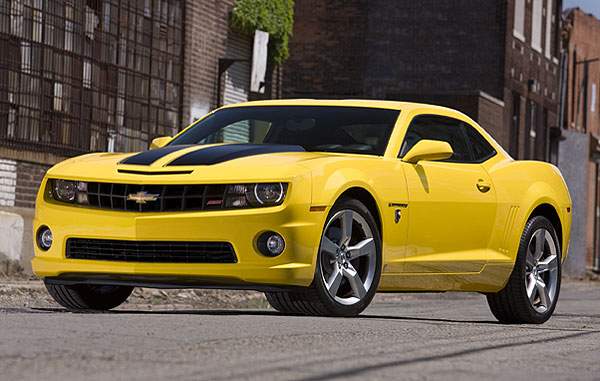 The Comic-Con event in San Diego this week hosted the unveiling of GM's latest specialty package, a Camaro dressed in the colors of Transformers Autobot, Bumblebee. The $995 package includes yellow paint, black stripes and plenty of Autobot logos.
SHARE

Like many, I prefer my cars with few adornments — aside from an air-freshener tree if the dog’s on board. Most often, cosmetic packages cost too much for what you get — a couple stripes here, a few shiny dashboard panels there — and tend to revel in the kind of lily-gilding enjoyed by Housewives of Insert-Name-of-Well-Heeled-American-Suburb-Here. But fans of the Transformers movies may think differently about Chevrolet’s new package, which will turn a stock Camaro into the heroic Autobot called Bumblebee. Of course, the Transformers edition Camaro won’t do much to ward off evil Decepticons stalking your garage, nor will it add much to the stock Camaro’s performance.

GM is showing off the Bumblebee package this week at the annual fête for the fantasy set, Comic-Con International, in San Diego. Like the movie car, the Transformers edition is yellow, with a black rally stripe on the hood. It’s available on the V6-powered LT or V8-powered SS Camaro models.

The Transformers edition also comes with the Autobot shields, familiar to fans of the movie, tacked onto the side panels and wheel center caps. An embroidered version of the shield appears on the center console. The Transformers edition Camaro slaps $995 in mostly profit onto the popular muscle car’s sticker price, a cost only the most hardcore fans of the franchise will likely look past.