Mercedes-Benz's AMG division is best known as a builder of German muscle cars, but can an all-electric prototype give its image a fresh shade of green? 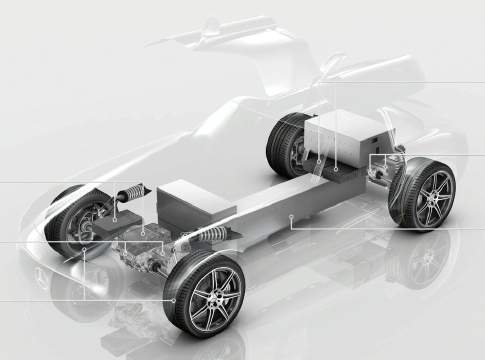 After a week of rumor-mill musings online, Mercedes-Benz and its high-performance specialist division AMG offered a first look at a prototype all-electric sports car. And by “first look” we mean “better use your imagination.” The company released some details on a version of its upcoming SLS AMG roadster with an electric drive system. Propelling the concept car are four in-wheel electric motors providing 526 horsepower and a maximum torque of 649 lb-ft. That means, when the SLS AMG electric hits the streets — rumored to happen in 2015 — it’ll likely be quite a performer.

Why the in-wheel motors instead of wheel-hub electric motors, as in some prototypes? Mercedes says it’s all about reducing unsprung mass. The company says it’s also engineered the car to have the same low center of gravity and balanced weight distribution as the gasoline-powered model. Also, a software-controlled all-wheel-drive system, dubbed AMG eDrive, micromanages torque delivery down to the individual wheel. The first prototype will get a liquid-cooled 48 kWh, 400-volt lithium-ion battery that can be charged by a plug-in system as well as regenerative braking. More details to be announced.

Aside from the technology play, the announcement is also likely calculated to attract attention to the company’s gorgeous new SLS AMG sports car, set for a debut later this year. Not that the SLS needs gimmickry to win it coverage: Photos of the upcoming, high-end homage to the classic 300SL “gullwing” Mercedes of the 1950s leaked to German car magazine AutoBild earlier this week. Autobild says the SLS will get a 6.2-liter V8 engine producing 571 horsepower and 479 lb-ft of torque, able to launch it from zero to 62 mph (100 km/h) in 3.8 seconds, and up to a top speed of 196 mph. More details will likely be revealed when the SLS AMG is unveiled later this year.