MIT’s Project elEVen: an Electric Car That Recharges in Under 11 Minutes 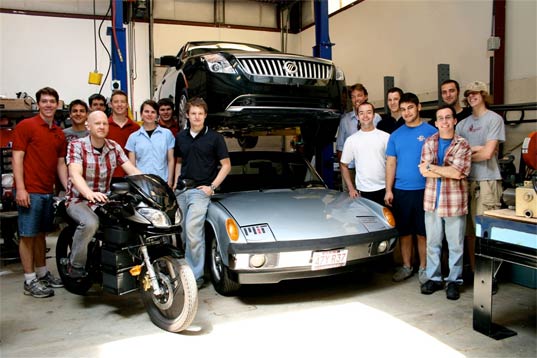 MIT’s Electric Vehicle Team is working on Project elEVen, an electric car which aspires to top 100 mph, travel 200 miles on a single charge, and rejuice in around 10 minutes.

The team is starting with a Lincoln Milan hybrid, whose engine they have gutted and converted to all-electric power. Their goal is to create an electric car that has mainstream appeal, both in looks and performance, while staying true to an all-electric design.

This team of student engineers hope to accomplish the feat on three fronts: for speed, they hope to use a three-phase AC motor that can push out 130 continuous kilowatts and is normally used power a 33,000-pound bus. For range, they want to use lithium nanophosphate battery cells from A123 — those have been on the market for a few years. And for rapid recharging capability, they plan to use a 350-kilowatt recharging system that will get a thirsty car up and going in under 11 minutes.

PC World says they’ll need roughly 7,900 of those battery cells to power the 250-horsepower car, and will have to use MIT’s own power plant because the 350-kilowatt charger could blow fuses in 20 homes at once.

Though they just started this project in June, the team hopes to have the project completed by 2010. And if their converted Porsche 914 EV was any indication, I’d say that’s a reasonable goal.

[via EVT Blog via PC World via Inhabitat]