Mike and Maike, the design firm responsible for the Android-powered T-Mobile G1 Phone (and its notorious chin), have come up... 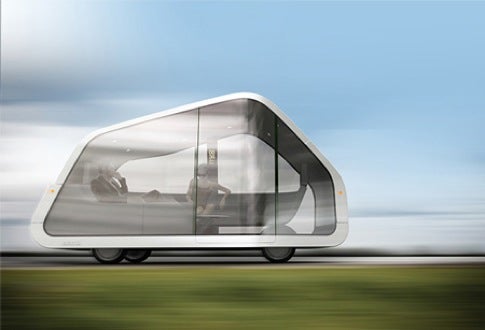 Mike and Maike, the design firm responsible for the Android-powered T-Mobile G1 Phone (and its notorious chin), have come up with what they consider to be the car of the future. In this ideal car, you don’t drive, and you don’t speed. Instead, you sit back and relax in what amounts to a mobile living room.

The electric car, dubbed “ATNMBL” (Autonomobile) aims to change the way we ride in cars. The big windows and low speeds are meant to encourage you to enjoy the view at a leisurely pace, rather than revel in pure speed. It seats 7, has a large display piping in information from the Web via open-source software, and has an electric, sliding-glass door. Oh, and it has a bar!

Pointless, you say? Well imagine a night out on the town, where you’ve eaten yourself into a food coma. It’s 11 PM, and driving back home or sitting in a smelly taxi is the last thing you want to do. You really just want to sit down somewhere and watch some TV while you’re whisked away to your awaiting bed. The ATNMBL could essentially serve as your own, personal sleeping taxi.

As for tech specs, the car would use a combination of GPS, Lidar, radar and stereo cameras for the self-driving functionality, drawing upon a database of maps for navigation. The ATNMBL would be all-wheel-drive, with 4 electric motors powering each wheel separately. And to top it off, a solar panel would come equipped on the roof, for some auxiliary power. 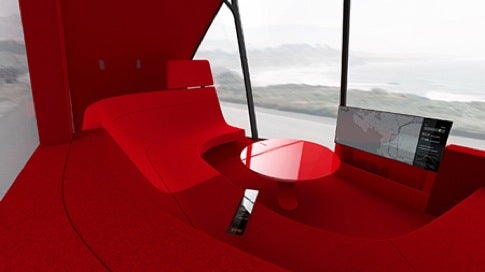 Also neat is that the ANTMBL would have voice controls would also be featured in the car, able to discern where you would like to travel. The car would also ask how much time you have to get to your destination, and whether you’d like to take the fastest route, or a more scenic one. And when you exited the vehicle, it would park itself.

Pretty dreamy even as far as concepts go, but it’s a well-thought-out system that drastically re-imagines how we transport ourselves, with less pollution, greater time savings, and safer road conditions the end result. [Dezeen via Fast Company]