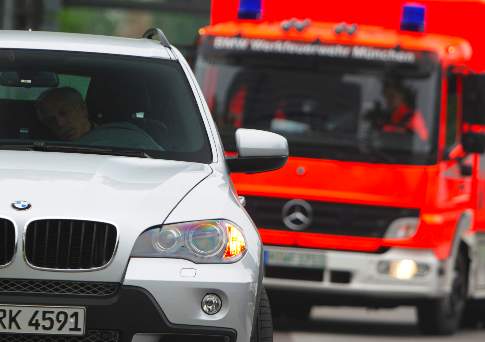 A new autonomous vehicle-control system on the BMW drawing board could prolong drivers’ lives behind the wheel, without sacrificing their own and others’ safety. That’s good news for elderly drivers. The Insurance Institute for Highway Safety reports crash fatalities among drivers over the age of 70 fell 21 percent between 1997 and 2006, despite a 10 percent increase in that population. The decline is likely due to elderly drivers self-limiting their driving. But hanging up their keys means a loss of independence and lower quality of life for older drivers — especially in rural areas. This new system could give that independence back.

BMW’s Emergency Stop Assistant system (now in development) detects when a driver is stricken by a serious medical problem, or otherwise loses motor control, and automatically activates an autonomous driving mode. The system flicks the hazard warning lights on and then maneuvers to the outer edge of the roadway — accounting for the traffic around it — before stopping entirely. At the same time, BMW’s ConnectedDrive telematics system sends out an emergency call with data on the location and the driver’s condition. The emergency stop system employs such existing assistance technologies as lane departure warning and active cruise control, which use sensors and software to detect other vehicles and objects on the road, and in some cases apply the brakes.

BMW officials say the emergency stop assistant will also aid younger drivers with maladies like diabetes and heart disease, and will initially be of best use on highways, where driving and roadway variables are fewest. The Emergency Stop Assistant is part of an ongoing research project, “SmartSenior – intelligent services for senior citizens” by Germany’s Federal Ministry of Education and Research.