The car TV star surpasses BMW to set a new hydrogen-car speed record in a vintage streamliner with a funny name. 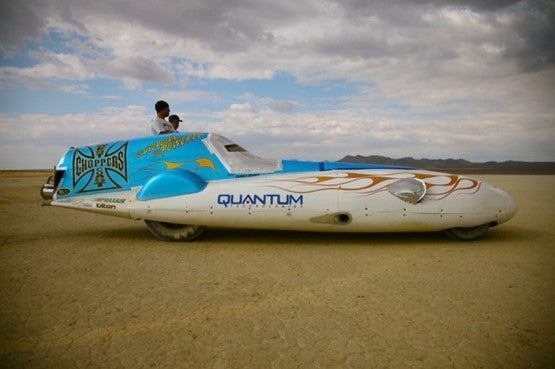 Call it the Dees-Milodon Engineering-Davis B Streamliner. That’s the name of the vintage speedster in which automotive celeb Jesse James this week set the land speed record for a hydrogen-powered car. The daredevil star of Spike TV’s “Jesse James is a Dead Man,” reportedly hit just shy of 200 miles per hour in the modified, 40-year-old streamliner, breaking a previous record set by BMW.

Like the previous record holder, a V12-powered BMW H2R that hit 185 mph, James’s hydrogen car was powered not by fission, but by a hydrogen-fueled internal combustion engine. The recently restored streamliner was fitted with a 572 cubic-inch Chevrolet V8 and twin turbochargers supplying 50 pounds of boost and an ice-water cooling system to prevent engine-block meltdown. For fuel, a 10,000 psi tank of hydrogen gas from by Quantum Technologies replaced the previous tank of gasoline. James reportedly missed his goal of 200 miles per hour by just three tenths of a second.

Practicalities of hydrogen combustion aside — not to mention the possibility of pesky NOx (shhh, don’t tell California) — the display on the El Mirage dry lake bed in the Mojave Desert at least proved alternative energy could become a new gearhead obsession.