A hydrogen-powered two-seater unveiled in London this week can seat two, turn in the equivalent of 300 MPG and hit a top speed of 50 mph. Plus, its blueprints are open source. Take that, auto industry 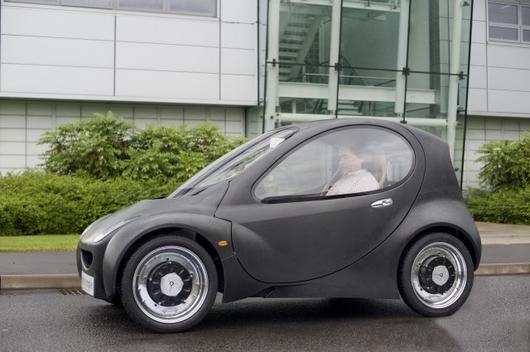 The Riversimple Urban Car was nine years in the making. But when the diminutive, hydrogen-powered prototype debuted in London recently, the biggest difference between it and other fuel-cell vehicles wasn’t its in-wheel electric motors or banks of ultracapacitors. It was its development-and-business model.

The two seater is the work of Hugo Spowers, a former motorsports engineer. Spowers not only developed the car and its powerplant, but also its nonconformist R&D philosophy. Plans for the Riversimple Urban Car will be “open source.” Like a Wikipedia entry or the Firefox browser in which I’m typing this post, the Riversimple will be open to tinkering by a community of experts free to download the plans and make their own changes. Spowers says open collaboration on the Riversimple car will speed development and improve the end product.

The plan is also not to sell the Riversimple, but to lease them. Manufacturing won’t take place in a city-sized factory owned by a single, giant automaker, but distributed to small, local factories.

The Riversimple weighs only 772 pounds and emits less than a third of the C02 produced by the newest hybrids. Propelling force comes from four in-wheel electric motors that can regenerate electricity during braking, stored in a bank of ultracapacitors to be reused to power the motors during acceleration. Its light weight allows for a mere 6kW fuel cell, not the 100 kW found in Honda’s FCX Clarity fuel-cell vehicle now in fleet testing.

The company needs $32.5 million in investments to make the Riversimple project a driveway reality.