Rally champs aim for an uphill speed record at the treacherous Pike's Peak hillclimb in a Ford Fiesta. But will racing cred lure small-car buyers to US dealerships? 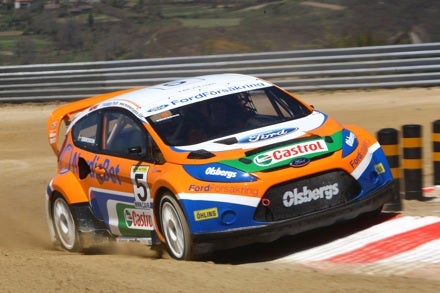 World Rally - 05/27/09 Dearborn, Mich.: Marcus Gronholm and Andreas Eriksson, manager Olsberg Motor Sport Evolution team from Sweden, will bring two new Fiesta Rallycross cars to compete in the annual Pike's Peak International Hill Climb in Colorado on July 19. They will compete in the Unlimited Class at Pike's Peak, in an attempt to be the first team to break the 10-minute mark over the 12.4-mile, 156-turn pavement and gravel course. (Ford Racing) (05/27/09). Ford
SHARE

The old adage “race on Sunday, sell on Monday” apparently still holds water among US automakers. Ford announced this week the company’s Fiesta subcompact will make its US motorsport debut at the punishing Pike’s Peak International Hill Climb this July. The company is apparently cultivating a high-performance image for its economy-minded Fiesta subcompact, which is set for a market launch in the US by 2010.

Sweden’s Olsberg Motor Sport Evolution team will field two Fiesta rally cars at the famed Colorado hillclimb this July 19. The all-wheel-drive Fiestas will get power from a two-liter Duratec engine tuned to produce up to 800 horsepower. Rally drivers Andreas Eriksson and Marcus Grönholm will attempt to navigate the 156-turn, 12.4 mile mountain course in under 10 minutes. That time would set a new hillclimb record. A far less potent Fiesta is coming to Ford dealerships in the US in 2010.

Ford Racing North America, is not involved in the project, other than to provide assistance and logistical support.

The Ford Fiesta will replace the company’s compact Focus as Ford Motor Company’s standard competition rally car. The Focus has scored 37 rally victories, including one this past weekend at Italy’s Rally d’Italia Sardegna.

The Pike’s Peak International Hill Climb, known as “The Race to the Clouds,” is the second oldest motorsports event in the US, taking its name from the mountain peak above Colorado Springs in the Rocky Mountains.