Honda’s new hybrid teaches you how to save gas (check out the video!) 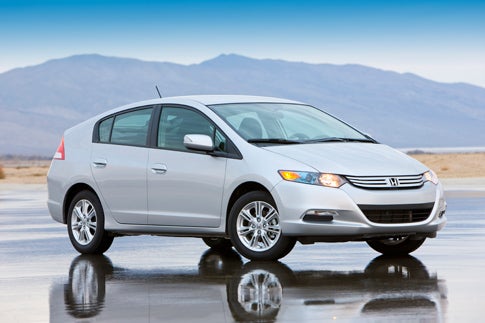 Powered by a 1.3-liter, 88-horsepower gas engine and a 13-horsepower electric motor, the car averaged 38 miles per gallon even when I was ignoring its warnings. Mileage shot up to the low 50s when I engaged the car’s three gas-saving features, detailed on the next page.

1. Bad-Driver Override Press a green button on the dash to engage Econ mode, which adjusts the car’s systems to maximize fuel savings. For example, the Econ controller converts jittery acceleration into smooth throttle adjustments — although you can still floor it to get out of a jam. In this mode, cruise control saves gas by accelerating more slowly to the dialed-in speed, and the air conditioner slows its fan and recirculates air.

2. Real-Time Updates One of two driver-feedback systems on the Insight, Eco Assist displays a glowing arc above the digital speedometer. The arc’s color varies from blue (wasteful) to blue-green (somewhat efficient) to green (efficient), depending on how a driver accelerates or decelerates. A separate screen near the tachometer displays twin bar graphs that show drivers how their starting and stopping habits affect fuel consumption.

3. Kudos For Being Green The Insight’s Eco Guide makes sensible driving as entertaining as playing a videogame. Starting with empty graphical “stalks” shown on the multi-information display, efficient drivers can earn “leaves” that fill out the five branches. Over the car’s lifetime, a thrifty pilot can accumulate a second tier of leaves, then a flower on each branch. When a driver grows all five plants, the screen displays a trophy.