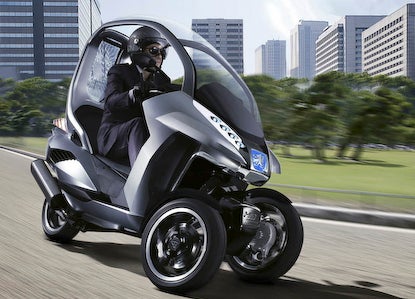 Quick, name a car with three-wheel drive. Okay, trick question; this isn’t quite a car, but Peugeot’s idea of a fuel-efficient all-weather runabout. The HYmotion3 Compressor Concept foresees a hybrid vehicle in more ways than one: part gasoline-, part electric-powered; part car, part scooter. The French automaker says it offers the stability of a trike with the protection of a safety cell similar to that which supports occupants of a Smart car.

Like a Toyota Prius, it can run in electric-only mode at low speeds, by way of front-mounted, in-wheel hub motors, each producing up to four horsepower. The main power source is a supercharged 125cc engine producing 20 horsepower. In total, the powerplants could provide the performance equivalent of a 400cc motorcycle. Traditional hybrid-drive accoutrements include regenerative braking, a stop-start engine function, and a mileage boost, in this case a projected maximum of 118 mpg. But will Peugeot, one of the largest scooter makers in Europe, build it for mass consumption? Ask someone from the future.