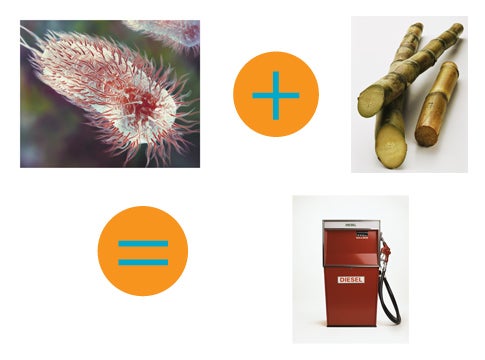 E. coli has earned a nasty reputation for upsetting stomachs and killing people. But now scientists at LS9, a start-up in South San Francisco, are putting the bad bug to good use, genetically engineering it to excrete biodiesel. The fuel “burns just like diesel,” says Greg Pal, the senior director at LS9 [see Breeding the Oil Bug, about the rise of microbial biofuels].

In September, LS9 made headlines with the launch of a pilot plant in its hometown that turns out hundreds of gallons of the biodiesel a week. The plant mixes modified E. coli with sugarcane in large vats of water. The microbes metabolize the sugars and excrete fatty acids that have the same hydrocarbon configuration as petroleum. Unlike other biodiesel setups, LS9’s fuel is easy to collect — it floats to the top of the water and is skimmed off like cream from milk — and can go straight into your gas tank.

Making fuel from sugarcane uses fewer resources than corn, and biodiesel doesn’t require the major infrastructure upgrades that ethanol and natural gas call for. A gallon of fuel from sugarcane-fed bacteria could cost $50 a barrel, Pal estimates, compared with the current $200 price tag for a barrel of conventional diesel. And LS9 says it can further drop costs by feeding the bacteria wood chips and other biowaste. Pal expects a large-scale plant to be up and running by 2011.