Electric cars could start a grab for natural resources on par with the petroleum industry; is compressed air the answer? 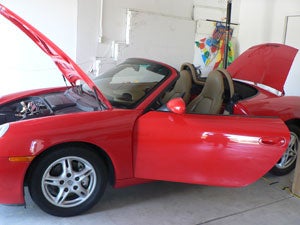 If you thought the rise of petroleum caused global economic upheavals, just wait until we start producing electric-car batteries in mass quantities. That’s the warning from Glenn Bell, CEO of Air Fuel Auto. Bell told reporters at this weekend’s Alt Car Expo in Santa Monica the need for precious metals and other raw materials for next-generation batteries could have a ripple effect on the global economy. Of course, Bell isn’t a passive observer; he’s got his own answer to the alternative-fuel question. You’re breathing it.

Bell brought to the Expo a one-off 1999 Porsche Boxster powered by a system he calls MIIN-AER, or Minimally Intrusive, Intensely pNeumatic Air Energy Recovery system. With patents pending, details are sketchy, but apparently it channels the potential energy of compressed air by way of temperature differences. Leaving aside the many gas- and thermodynamics questions, the system as installed in the Porsche apparently can travel 40 to 45 miles per hour, with a range of 50 miles. Bell says a second phase will capture thermal energy from braking to provide better numbers, with a short-term goal set of a 100-mile range at 50 mph.