Toyota Winglet to Challenge the Segway 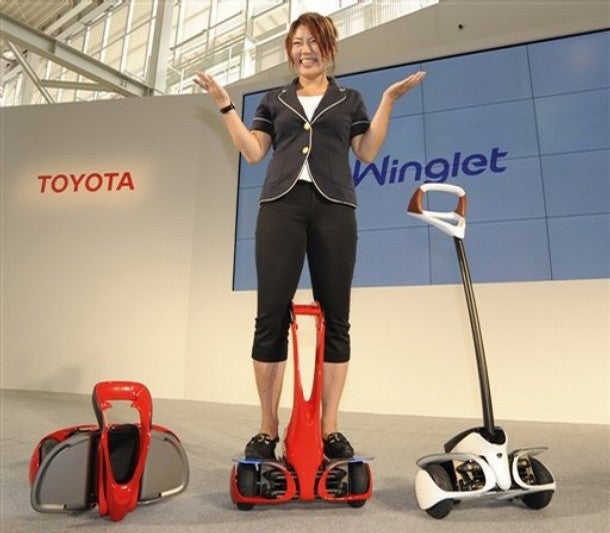 A model displays Japanese automaker Toyota Motor Corp.'s new motorized ride "Winglet" during a press conference in Tokyo Friday, Aug. 1, 2008. Toyota will start testing three types of the stand-up-and-ride contraption, that travels at up to 6 kph (3.7 mph), later this year at a Japanese airport and resort complex and next year at a shopping mall to get feedback from people. No plans are set to sell the Winglet as a commercial product. The one at left, that weighs 9.9-kg (22-lb) is folded for carrying purpose. The other two weigh 12.3-kg (27-lb). (AP Photo/Katsumi Kasahara). Katsumi Kasahara
SHARE

Segway users, look behind your shoulder. Another “personal transport assistant” is waiting in the wings.

The Toyota Winglet will be used in trials at a Japanese airport and shopping center in 2009, with a planned mass deployment in early 2010. It’s much slower than the Segway with a top speed of only 3.7 mph, but comes in three models: the S (which is only 18 inches tall and weighs 22 pounds), the M (27 inches tall and 27 pounds), and the L (about 4 feet tall and the same weight as the M). Both the S and M use leg braces to help you steer, while the L provides a handle bar. Like the Segway, the Winglet senses weight shifts for steering and speed and can slow down or stop if you teeter too much.

In a video demo, a Toyota representative effortless drove around a stage with the S model. Trials in Japan will determine how well the device maneuvers in crowded areas, and how pedestrians not riding on a Winglet will react. The press release for the Winglet mentions how the Toyota robotics division intends to help contribute the “health and comfort” of future society. My only comment: in current society, with pervasive electronic entertainment, gas-guzzling cars, and a coach-potato lifestyle, it seems as though introducing another vehicle that does not require physical excursion is counter-productive.

But who knows? The Winglet looks slick and portable, a device that is light enough to carry in the car and use on a whim. It could also provide more mobility for those who walk to work every day. In the US, it’s still unclear whether devices such as the Segway and Winglet will catch on; but manufacturers seem to have few qualms pushing them.