Futurists foresee a world where motorcycle builders go four wheeling, Formula One takes on the city and the Karma comes to life

Finland’s Valmet Autos will be building the luxurious $80,000 Karma.

Fisker automotive, creator of the Fisker Karma prototype hybrid-electric car, announced today that it has signed a production deal with Finland’s Valmet Autos to build the luxurious $80,000 Karma.

Fisker CEO, car designer Henrik Fisker, unveiled the slinky Karma (powered by a Quantum Technologies’ military-grade hybrid powertrain) at the Detroit auto show in January 2008. Reuters reports the first of the four-door hybrid sedans are scheduled for delivery in late 2009, with volume projected to hit 15,000 units a year for the US and Europe.

The Fisker-Valmet deal is the latest in a growing trend of huge, all-encompassing automakers giving way to smaller, boutique firms. These companies, the theory goes, would only design and market car models, delegating mass production to plant-owning builders-for-hire (perhaps based in India or China). We’re still a long way from that model, but it’s not hard to find signs of movement toward that direction. 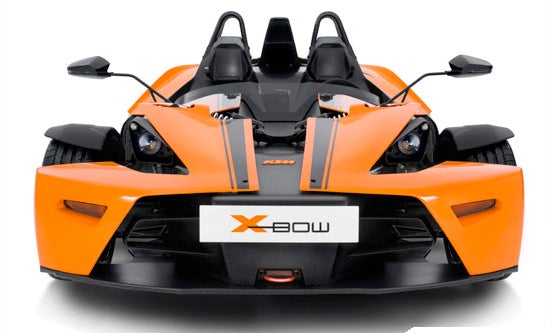 Like Fisker, Austrian motorcycle builder KTM, recently began its own dalliance with car marketing. KTM made waves in the automotive enthusiast community last year by introducing the X-Bow (pronounced crossbow), a stripped-down roadster powered by a 300-horsepower Audi engine and targeted to weekend racers. Now, the UK’s Car magazine reports KTM is working on at least two new car projects, a new kind of off-roader that’s part quad ATV and part SUV (dune buggy, anyone?), and a line of new, low-cost city cars. The latter would be a joint project with India’s third-largest automaker (and rickshaw builder), Bajaj Auto. 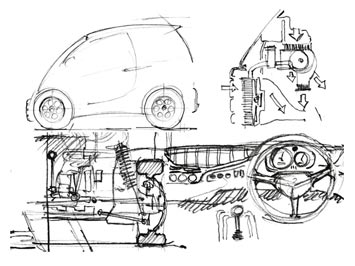 Sketches are all that Murray has released thus far.

A similar small, lightweight and economical city car is forthcoming from Formula One racecar designer Gordon Murray. Supercar enthusiasts know Murrary as the brains behind the McLaren F1, which held claim to fastest car in the world during the 1990s. His new project will likely be quite a bit slower. Murray says his blank-slate project car, dubbed T25, will revolutionize personal transportation by being cheap to produce, purchase and operate. Unlike KTM, Murray hasn’t released production details, but we’re betting on a similar tie-up.

But production-for-hire is nothing new in the auto industry. As but one example, Austrian production supplier Magna Steyr builds European-market SUVs for Chrysler and is set to assemble the upcoming Aston Martin Rapide sedan in 2009 and—starting in 2012—Porsche’s mid-engine Boxster and Cayman models. If their success is any indication, perhaps the futurists are onto something.