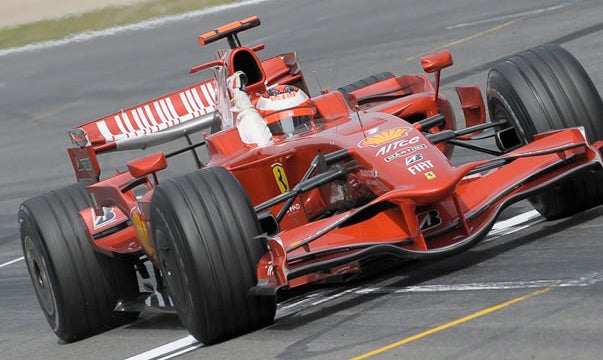 Passenger-car gasoline in Italy costs the equivalent of around nine bucks a gallon. Formula One racing fuel goes for several euros more. And at a (full-speed) fuel consumption rate of between three and four miles per gallon, Ferrari’s F1 cars can burn through heaps of Italian green during track testing. That’s one reason the company, along with a few other F1-entrenched firms, are betting on the latest virtualization tech to help shave a few Euros off the high cost of testing.

F1 teams have been using simulators for years; BMW Sauber works with sponsor Intel, and Toyota Racing invested in a new, hydraulically–powered that uses data from prior seasons to simulate Monaco, the UK’s Silverstone or Montreal’s Ile Notre Dame. Now Ferrari has joined the game, commissioning electronic control-systems firm Moog Inc. to build a next-generation driving simulator for its headquarters in Maranello, Italy. Moog (not related to the music-synthesizer company of the 1970s) says the system will offer drivers the feel of a real environment along with the direct feedback on their actions that racing engineers need to properly develop and set up the cars’ components. Not that Ferrari needs more help; last weekend the team swept the French Grand Prix.