With the help of YouTube, a lap around the legendary (and publicly accessible) Nürburgring in Germany is becoming a new gold standard of auto performance 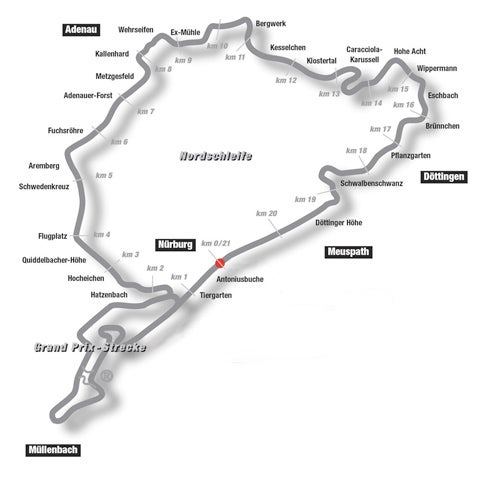 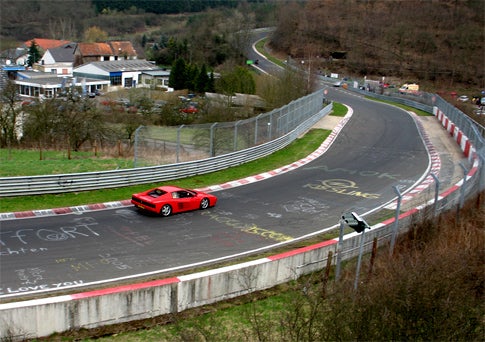 Ferrari on the ‘Ring

A Testarossa rounds one of the winding, wooded curves of the publicly-accessible Nürburgring Nordschleife course.

Back in 1946, Mechanix Illustrated writer “Uncle” Tom McCahill began measuring cars’ performance by how quickly he could launch them from a standing start to 60 miles per hour. That measure, evocative in its simplicity, quickly became the standard for judging a passenger car’s performance, and a perfect proxy for advertisers to capture the excitement of driving in a single phrase. Zero to 60 in a scorching 5.5 seconds! But in the Internet age, carmakers can derive greater benefit from a performance measure that’s not only evocative, but also makes for great viral video. Enter the Nürburgring Nordschleife, a historic toll-road in Nürburg, Germany.

The Nürburgring has been hallowed racing ground and home to professional racing events, once including the German Grand Prix, since 1927. Fearless, white-knuckled drivers of lore, like Jackie Stewart, Sir Stirling Moss and Phil Hill called the circuit “Green Hell” for its torturous curves, elevation changes and its propensity in spots to send cars airborne. These days, the track’s accessibility, both virtually and in real life has made the Nürburgring Nordschleife an institution for car nuts. It’s a must-master for Grand Turismo and Project Gotham gamers, but anyone can take a lap in real life for €21 ($32.60) or €70 ($108.66) for four laps. ‘Ring fans from around the world refresh the track’s webcam hundreds of thousands of times daily, scanning for the top-secret test prototypes carmakers routinely bring for performance testing. Those photos also feed the websites hungry for hints at what’s next from carmakers.

This widening Nürburgring mystique is of particular benefit to automakers looking for easy performance cred. Nordschleife lap times are now scrutinized and passed around the web as the new gauge of a performance car’s capability. It’s become such that any car with a documented run (mainly via real-time video) has a guaranteed marketing hook.

Late last year, Nissan caused conniptions among Corvette fans—who consider the GT-R an arch rival—when a video surfaced (see below) showing a new GT-R lapping the ring in 7 minutes 38 seconds. The clip has since racked up more than a half-million views on YouTube, along with 1,500 comments. Just weeks ago, none other than the Nissan CEO himself, Carlos Ghosn, announced the GT-R had since rounded the ‘ring in 7 minutes 29 seconds, making it the fastest lap of any production car.

GM responded with a prediction for its new Corvette ZR-1, when Corvette chief engineer Tadge Juechter announced the limited-edition, six-figure ‘Vette would lap the ‘ring in a vague but tantalizing gauntlet-throwdown of “7 minutes 20-something seconds.” In the meantime, Cadillac released a video of its 2009 CTS-V competing a lap in 7:59.32, piloted by GM Performance Division’s John Heinricy. Like the Nissan video, this one swept the automotive forums and blogs, and by the next day, the numbers were on the lips of every car wonk from Detroit to Gdansk. The Cadillac is now believed to be the fastest production sedan ever to lap the ‘ring.

With no sanctioning body to verify these times—other than the efforts of Germany’s Auto Sport magazine, which sometimes performs its own testing—they’re generally policed by the automotive community at large and posted on Wikipedia. This might change if the Nürburgring’s influence over carmakers’ marketing plans widens. Maybe even the Guinness people will get involved.

Dan Pund, Detroit senior editor of Edmunds Inside Line put it best. “In the grand scheme, a car’s lap time of a wicked, old German racetrack might not mean much. Except that we all know it does.”

And this gem from 1967, as a vintage Lola/BMW F1 machine takes a lap around the ring with fantastic musical accompaniment.