At the Geneva Auto Show: a biofuel-powered concept for the well-heeled 20-somethings of tomorrow 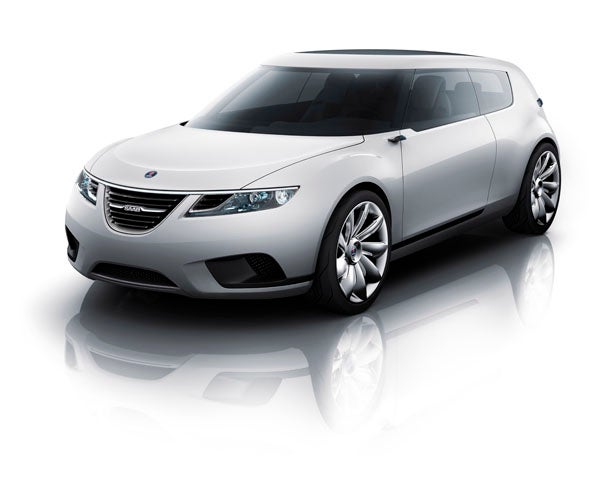 As the Saab logo on the hood attests, this is not a Mini Cooper from the future. It’s the Swedish automaker’s latest concept car—a next-gen compact that runs on a 1.4 liter, E85-capable turbocharged engine paired with an electric hybrid system. It draws on Saab’s earlier Aero-X and 9X concepts, and follows on the heels of the Saab 9-4X BioPower crossover concept unveiled at the Detroit Auto Show in January.

According to the press release, the 9-X BioHybrid is aimed at the young and tech-savvy seeking “responsible performance and high-tech communications.” The hybrid drivetrain is GM’s next-generation lithium-ion based system. Its engine uses both direct injection and variable valve timing to increase efficiency and power. And it can run on pure gasoline; though since it’s optimized for E85 (a fuel mixture of ethanol and gasoline) that will reduce its power output. Meanwhile, that bit about “high-tech communications” refers to a Ford Sync-like gadget-linking system designed in cooperation with Sony Ericsson provides “a wireless interface for streaming data, entertainment and satellite navigation functions for display and use . . . [that] allows the simultaneous use of multiple devices.”

How real is it? Saab is pitching the concept as a “vivid vision of what a future compact car from Saab could look like,” which makes it sound fairly hypothetical. Then again, plenty of observers have noted that Saab desperately needs a car to compete in the compact segment—but a regular old petrol-burning version of this car could do that job just fine.