NASCAR Not All That Much “SAFER” 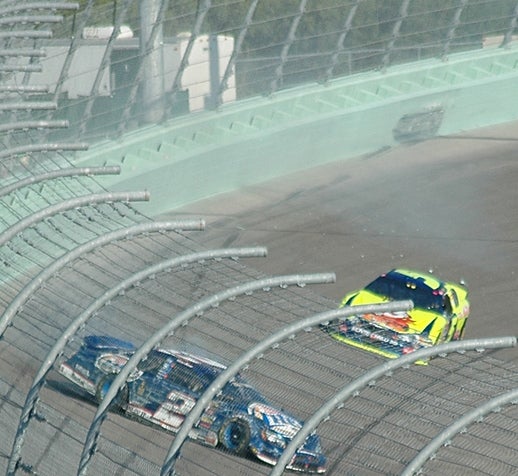 It’s likely that the death of Dale Earnhardt has saved lives. From head restraints to stronger frames, significant action has been taken since the NASCAR star’s passing to protect other drivers barreling around walled-in tracks at 200 mph. At the top of the list of developments was the SAFER Wall (Steel and Foam Energy Reduction), developed at the University of Nebraska.

So, when Jeff Gordon crashed at the Las Vegas National Speedway on Sunday, surely he crashed into a SAFER wall as opposed to a less-safe wall?

Nope. While SAFER walls are installed on the outside walls of the track, the inside walls were of the not-so-safe variety. Confused? So was Gordon, after experiencing the hardest hit of his life, and so was his transmission after getting ripped from beneath his hood.

Apparently Vegas racing authorities figured their odds-makers could justify protecting only the spots most likely to be slammed into. Crazy, right? It gets worse. Vegas isn’t the only track to have SAFER walls missing in key locations. How does NASCAR allow this? It’s not like the sport is strapped for cash.

Car owner Rick Hendrick has voiced his disappointment. “If the teams are asked to spend $8 million apiece for a car that is a little bit safer, then we need to fix the damn walls at the track,” Hendrick told The Associated Press. “That ought to be priority No. 1, and if the tracks don’t have the walls, then we shouldn’t race there.”

Track owners and NASCAR representatives have promised to look into the matter, but until then drivers had better pick their spots carefully.