Blasts From the Past at the New York Auto Show

At this year's NYIAS, nostalgia is king. Launch our gallery to see why 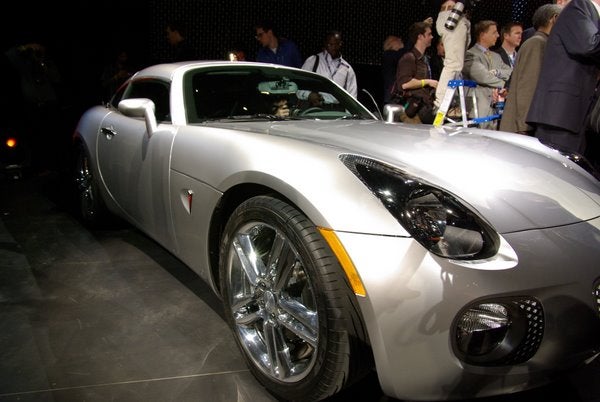 The new Soltice hardtop can match or maybe even outperform the Porsche Cayman.

We slogged through the rain and traffic all the way across town to the Javits Center for the 2009 New York Auto Show. No, it’s not Detroit or Geneva; but the show still has a fair share of announcements, plus a chance to see up close those cars that recently debuted in other cities.

So far, it’s really been an American show—with big debuts by GM and Chrysler. It was also the year of retro design and nostalgia. Pontiac brought out three new models, including a yet-to-be-named revival of its former El Camino car/truck hybrid—extolled by rapper 50 Cent. Dodge took us back to the seventies, introducing three versions of its revived Charger model. And Mercedes waxed poetic about the glory days of the 80’s, when its belching diesel sedans ruled the upper-class subdivisions. It also introduced SUVs using its new BlueTec clean diesel technology.

Launch our gallery here for a further look at some of these highlights:

Acura fired a BB gun across the bow of BMW, Mercedes and Toyota—introducing its second-generation TSX luxury sedan—aimed to compete with models such as the Mercedes C class and Lexus IS lines. The 2.4-liter engine packs 201 horsepower and 179 pound-feet of torque, but Honda, having earned EPA’s Tier II level of efficiency, claims better fuel economy than that of its predecessor. And it’s wired. The optional “Technology Package” includes a voice-activated navigation system, realtime traffic updates and weather reports, plus a rear-view backup camera and a 10 speaker sound system. “This is the year of the sedan,” they told us. If you’ve seen the new Honda Accord that debuted in the fall, you’ll recognize similar design cues in the TSX. And if you like the new Accord, this is a nice step up.

Nissan grabbed more attention with its hot Maxima revival. In keeping with the retro theme, Nissan reminded us that they “invented the four door sports car,” with the Maxima of the 1990s. “And the original four-door sports car is back,” they said. Instead of dragging out a rusty old model from the Clinton era, they busted out the 2009 Maxima—a suburban beast packing a 290-horsepower V6 engine that cranks a tire-chirping 261 pound-feet of torque. It was tuned on Germany’s famous Nürburgring, where sports cars such as Nissan’s new GTR also honed their game. The interior is pretty slick for souped-up soccer-dad car. And the lines are sleek—sheikh Japanese with a slight German accent.

We heard a stronger German accent from Thomas Weber, Mercedes head of research. Picking up on US election fever, Dr. Weber lead a “Vote BlueTec” rally to celebrate Mercedes bringing its clean diesel engine to its M line of SUVs. (BlueTec first came to the US in 2006.) Mercedes claims that, in a 3000 plus-mile test drive, its diesel SUVs got 11 percent better fuel economy than comparable hybrid gasoline models (though they didn’t say which). BlueTec is now offered on Mercedes’s GL, M, R and E class cars, “and there are more to come,” promised Weber.

Like a rivaling soccer fan, BMW’s North American CEO Tom Purvis took a jab at “our friends from Stuttgart,” saying that his company had diesels that are both clean and powerful. The company’s twin-turbo, direct injection diesel engine produces 335 horsepower and gets 500 miles per tank—or it will, when it gets here. Expect diesel models to hit the US by the end of 2008, Purvis said. An “active hybrid” (also known as two mode) will follow in 2009.

But the big unveiling was for a good ol’ fashioned gas-guzzler, BMW’s $65,000 M3 convertible. Its V8 engine cranks 414 horsepower, maxes at 295 pound-feet of torque and spins at a mind-boggling 8400 rpm—making it the highest-revving BMW ever. The engine is mated to a 6-speed, twin-clutch transmission. Sedan and coup versions of the M3 will join the convertible model.

BMW’s Concept CS Gran Turismo also granted its first North American audience. But Purvis spoke no more than the idle car itself about when and how this would turn into a real car.

Back to the US of A, and back to the seventies, Dodge brought out its new line of Challengers. After hearing about its $3 billion investment in fuel-efficient engine, we saw the one car that can wipe out all those gains, the SRT8 Challenger. Its 6.1-liter Hemi engine churns out 425 horsepower and an even-more-amazing 420 pound-feet of torque. That’s enough to get it to 60 mph in 4.9 seconds.

At the other end is the Challenger SE, which will sell at a starting price in the “low 20s.” No performance slouch, it has a 3.5-liter Vs with 250 horsepower and pound-feet of torque. But it promises 25 miles per gallon. The mainstream Challenger RT also starts in the 20s and offers a six-speed manual transmission.

For more images from the show floor, launch our gallery here