For his latest work, Italian motorcycle engineer Massimo Tamburini heads to the dark side 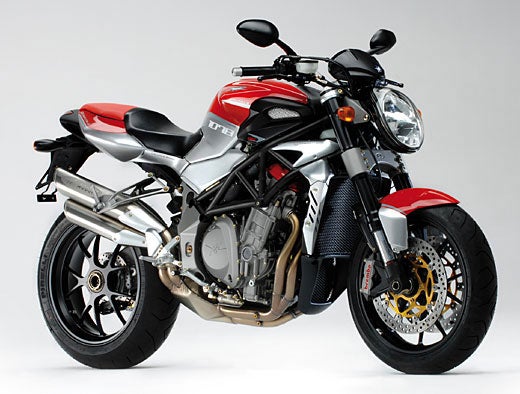 Motorcycle aficionados familiar with designer Massimo Tamburini’s work know that his style is not for the faint of heart. His 2006 Ducati superbike, the company’s flagship 999, was just a one-year wonder; Ducati reverted to form in 2007.

For his latest work Tamburini has jumped ship to those other Italians at MV Agusta and come up with the Brutale 1078RR, which appears to have some staying power (though not at the cost of get up and go power). The naked Brutale “flawlessly incorporates peak power with a uniquely mean style all it’s own,” says MV’s General Manager Matthew Sutzman. This beast boasts a 1078cc, liquid cooled, 4-stroke engine that churns out a visceral 154HP. A cycloptic front end that flows into the bike’s trellis frame and dual exhaust pipes gives the Brutale a beautiful yet brutally fast appearance even standing still. Lets hope this fine example of Italian art and engineering sticks around for more than a year.