General Motors will soon put fuel-cell SUVs in the hands of 100 lucky consumers. You could be one of them 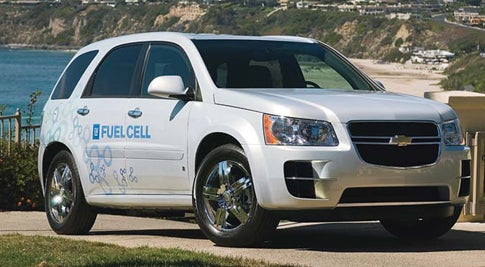 You still can’t walk into a dealership and buy a hydrogen-powered car, but if you live in Orange County, California, Westchester County, New York, or Washington, D.C., where it’s easiest to find a hydrogen filling station, you may be able to borrow one for a couple years. Starting this month, in what will be the largest real-world test of fuel-cell passenger vehicles, GM’s Project Driveway program is seeking good homes for 100 fuel-cell versions of its Equinox SUV. (Honda, by contrast, has leased just two of its FCX fuel-cell cars to customers.)

As with other fuel-cell vehicles, the Chevy Equinox Fuel Cell combines hydrogen and oxygen to generate electricity, with water vapor as the sole by-product-no smog-forming emissions, no greenhouse gases. Each Equinox stores nine pounds of hydrogen at 10,000 pounds per square inch; 2.2 pounds contain roughly the energy equivalent of a gallon of gasoline. At 50 mpg, the Equinox will travel about 200 miles on a tank. And if you’re worried about H-bomb fender-benders, breathe easy: The car is designed to meet all highway safety standards.

GM has yet to decide who will test the futuristic machines, which cost up to $1 million to build, but says that drivers will pay next to nothing, in exchange for their feedback. Interested? Check out chevrolet.com/fuelcell.