Who Killed the Gas Guzzler? 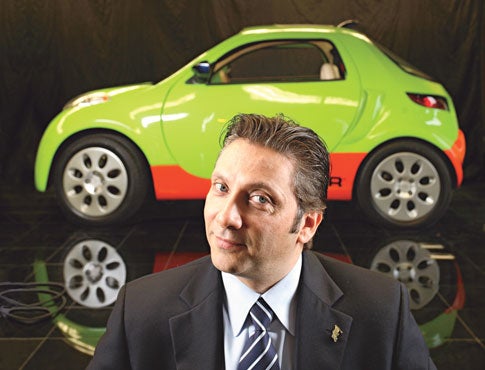 Steven Schneider has been selling cars-everything from tiny European imports to boat-like Lincolns-nearly his entire life. Now, as CEO of ZAP (for Zero Air Pollution) in Santa Rosa, California, he specializes in the distribution of small, fuel-efficient automobiles. It´s a job, he says, that makes him feel less like the stereotype car salesman with plaid pants and a white belt. The country´s largest retailer of electric vehicles-90,000 sold worldwide since 1994, including 300 electric cars but mostly ATVs and golf-cart-size vehicles-ZAP recently introduced the fastest production electric car in the country, a three-wheeler called the Xebra that can hit 40 miles per hour. By the end of next year, ZAP will introduce the Obvio, a pint-size Brazilian import that will be the nation´s first commercial car to run on 100 percent ethanol, followed by a Lotus Engineering electric SUV that will top 155mph. We spoke with Schneider about his thriving eco-dealership and his ambitious vision of a green automobile for every driver in America.

**Q: Why aren´t electric cars more popular in the U.S.?

A:** Those of influence don´t promote them. I hate to be so vague, but we´re not looking to make any enemies. That said, I believe that within the next few years, due to public demand, we´ll start to see more of them.

**Q: The Xebra is efficient, but what´s the point if the range is only 40 miles?

A:** It´s a great little inner-city commuter or country-road vehicle. It´s technically freeway-legal, but it´s not built for that. With it, we´ve introduced electric-drive technology at an affordable price-under $10,000.

**Q: What´s with the zebra stripes and neon paint job?

A:** People want to be noticed. They want to stand out in a crowd. It´s the same for Ferrari or Rolls-Royce drivers.

**Q: What about those of us who want more than a short-range cruiser?

A:** We´ve partnered with Lotus Engineering to introduce an entire line of green but very advanced vehicles. One is an electric SUV called the ZAP-X that we expect to sell in the $60,000 range next year. Its all-aluminum frame allows us to add additional batteries that give it a 350-mile range, a penny-a-mile operational cost, 155mph capability, touchscreen controls, and all-biometric entry and ignition.

A:** In the early stages, people will just plug in at work, restaurants, their homes. Costco and Wal-Mart already have outlets available. The infrastructure will change so you´ll just put a few quarters in a station and start refueling. The Xebra takes four hours to recharge, but the ZAP-X comes standard with a new fast-charging lithium battery. Plug it in, and 10 minutes later you´re on your way.

**Q: Will it kill your electric bill?

**Q: So from the Xebra to the ZAP-X, is your basic idea to have an alternative-fuel car for all consumers, except maybe the Hummer-lovers?

A:** Even the Hummer driver.