Think diesel is stinky and slow? This history-making 220mph racecar aims to prove you wrong. Click inside for video 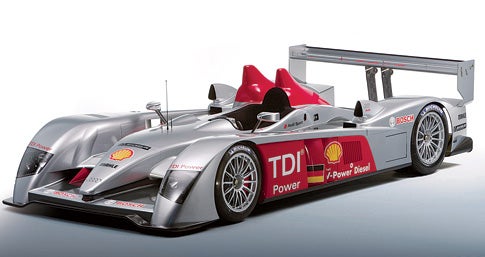 The quiet, fuel-efficient Audi R10 TDI is the first diesel racecar to win a major race

See a cool promotional video put together by Audi, featuring a time-lapse construction of the R10 TDI. Click here

If there were such a thing as an eco-friendly racecar, the new Audi R10 TDIwould be it. The machine made history in March when it nabbed the checkered flag at Florida´s 12 Hours of Sebring endurance race, becoming the first diesel-powered car to win any major auto-racing event. Not only is the R10 more fuel-efficient than its gas-slurping counterparts-and therefore able to go two laps longer between pit stops-its low-revving engine generates roughly half the noise.

The message? Modern diesel engines are no longer the smoky, technologically stunted dinosaurs of yore, especially not the 5.5-liter 12-cylinder in the R10 or its newest road-going cousin, the 3.0-liter V6.

Underlining the point is that the racecar uses a finely tuned version of the technology in Audi´s production cars: common-rail fuel injection. The system employs piezo-crystal injectors that open and close faster to more precisely control fuel flow and generate a more thorough burn. This helps fuel-efficiency and engine power while reducing emissions. It also allows the racecar to reach a staggering 650 horsepower at only 5,000 rpm, while its competitors must hit an ear-splitting 12,000 rpm to achieve that power. In production cars, the key bonus is mileage-Audi´s diesel Q7 SUV will get 23 miles per gallon. â€Common-rail injectors have taken away a lot of the attributes that plagued early diesels, like slow starts, lack of power and pollution,â€ says automotive technology consultant Mike Jackson.

Yet when it comes to selling diesel cars stateside, big hurdles remain. For one thing, it´s hard to find the ultra-low sulfur diesel needed to power them cleanly. (That will change in October, when new federal regulations require the fuel to be available nationwide.) And strict emissions rules still limit the sale of light-duty diesels in several states, notably California.

So while the R10 is tearing up the racetrack, you´ll have to wait for the road version. Audi aims to debut its diesel Q7 SUV by 2008.