The EPA is finally improving its antiquated mileage-rating system for cars and trucks. The biggest losers? Hybrids 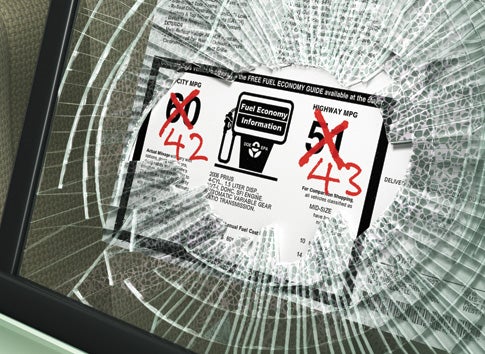 SMASHINGEXPECTATIONS: Under the EPA´s new mileage-rating system, the window labels of 2008 cars and light trucks will drop between 10 and 20 percent for city driving and 5 and 15 percent for highway. For hybrids, watch out: The estimated city mileage will plummet 20 to 30 percent.

The difference between expectations and reality can be brutal. Just ask anyone with a hybrid car. Enticed by impressive mileage estimates, drivers pony up thousands of dollars extra, only to find that their on-road miles per gallon never live up to the sticker’s promise. Conventional-car owners, too, have long complained about the discrepancy between the estimate of fuel economy and the reality of gas consumption, but the gap is an especially bitter pill for anyone who has spent a year on a waiting list.

Now the Environmental Protection Agency is coming clean about what “miles per gallon” really means-and mpg averages for both conventional and hybrid vehicles are set to nosedive. In January the agency, under mounting pressure from consumers and environmentalists, finally agreed to upgrade its 20-year-old testing system to determine mileage ratings for cars and trucks. The plan is to implement three new tests that will be more accurate and “better reflect the way most people drive,” says EPA spokesperson John Millett. The new regulations will be fully phased in by fall 2007, when 2008 models debut.

The proposed changes would bring several additional elements into the testing lab: cold-weather conditions; higher speeds and more rapid acceleration; and the use of air-conditioning. Most experts agree that the tests will provide more accurate estimates that better reflect modern engines and driving conditions. Compared with 1985, when the EPA last revised its testing methods, today’s vehicles are more powerful, speed limits are higher, there’s more stop-and-go traffic, and A/C comes standard.

But some experts worry that the EPA tests will disproportionately penalize high-mileage vehicles with small engines, such as gas-electric hybrids. The Prius and its kin use a battery as a second source of onboard power, which doesn´t produce as much energy in cold weather. The engine consumes more gas to make up the difference. And because of their smaller engines, hybrids are also more sensitive to A/C use. As a result, a gas guzzler’s number could dip from 20 mpg to 18, and a hybrid’s city estimate of 60 mpg could plunge to 42.

“We’re concerned that sales will drop too,” says John German, formerly with the EPA and now a hybrid-vehicle expert at Honda. That, he says, would be an unfortunate outcome, since hybrids will still get better gas mileage than nearly every gas-powered vehicle currently on the market.

The other worrisome issue, industry experts say, is that the new EPA tests will do nothing to improve overall fuel economy in the U.S. That’s because the Department of Transportation has its own set of calculations to regulate fuel-efficiency standards, known as the Corporate Average Fuel Economy rules, for automakers. Under the CAFE rules, the mandated average fuel economy for passenger cars is just 27.5 miles per gallon. Increasing that standard is the only way to force manufacturers to devise new fuel-efficient technologies, says Brendan Bell, clean-vehicle spokesperson for the Sierra Club. Bell puts the new EPA changes this way: “It’s like the doctor can now give a more accurate diagnosis, but you’re still not getting a prescription for the disease.”