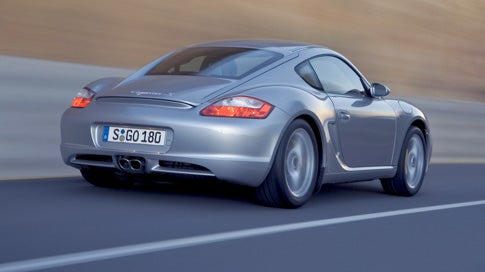 It’s heresy to 911 worshippers to say so, but the new Cayman S is suddenly the most beautiful car in Porsche’s lineup. It’s a Boxster coupe, basically a midengine two-seater with a fair amount of new body metal and interior appointments. But in reverse engineering a coupe from a roadster, Porsche managed to avoid both the slightly lumpy engine butt of the 911 and the too-symmetrical stance of the Boxster. The Cayman’s high roofline swoops back and down between the gorgeous haunches of the rear fenders, and a walkabout reveals that the whole car is a fugue of aggressive curving lines. Start it up, and it sounds like a Porsche, too. Engine aficionados will detect a complex balance of high and low P-notes, especially in the 6,000rpm zone. To me it just sounded like 285 eager horses.

I drove the version with the Tiptronic transmission, which has steering-wheel-mounted shifting buttons that work whether you’re in fully manual or “drive mode and I definitely prefer this to the equivalent system in the BMW M3; it’s simpler and more intuitive. Although some might gag at the thought of what’s basically a fancy automatic with manual override, the Tiptronic makes this one easy car to drive in the city.

With the engine mounted just behind the seats, this baby is balanced. I got the rear to drift as I cornered on some Appalachian backroads, but it was an oh-so-controlled slide, and the car stayed flat in the hardest turns. The brakes are awesome, as expected. There’s a bit of hesitation if you floor it in drive at certain speeds, but you get used to downshifting with the buttons before accelerating, to remind the car who’s in charge. You’re not totally in charge, of course, even in M mode; this is a smart, complicated German car, with stability control if you get sloppy. The Tiptronic will downshift if you screech to a halt, and shift if you cross the red line. But for the most part, it gives you permission to drive hard if you don’t act like an idiot.

My only gripe is the use of some cheap materials inside. The seats and dash are Teutonically rigid, but there’s a plate of cheesy silver plastic around the stereo and climate controls, and the whole recessed-cupholder apparatus-as finely engineered a contraption as a space shuttle´s Canadarm-feels like it would break into pieces sooner or later.

Small complaints, though. If you have 60-large for a car, I know how you should spend it.