The Red Team is the odds-on favorite, as much for its charismatic, no-excuses leader as for its strong showing last year 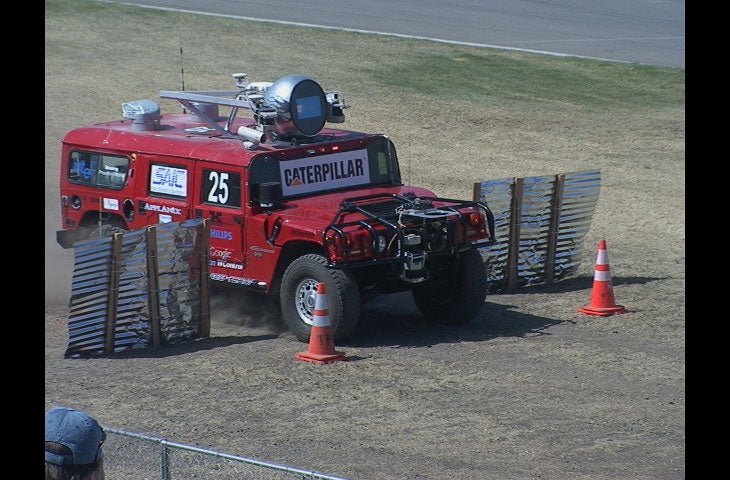 H1ghlander is the Red Team’s newest offering, with a rapid networking system that enables its many microcontrollers to communicate.

In this, the fifth of a series, Popular Science profiles one of the favored teams competing to win the Darpa Grand Challenge autonomous-vehicle race, which will take place on Saturday, October 8, near Primm, Nevada. Today we look at the Red Team’s next-generation Hummer, which features a sophisticated system of integrated sensors. Stay tuned to popsci.comfor more previews throughout the week and for minute-by-minute videos and updates on race day.

Rig
Sandstorm, the battle-hardened 1986 Hummer that was the Red Team’s sole entry in 2004, will be returning to the starting line with a mechanical facelift. It boasts a fresh engine, new suspension, and a gimballed platform that insulates delicate sensors from bumps and jostles. The Red Team isn’t stopping there, though. It will also enter a next-generation modified Hummer called H1ghlander, which is threatening to leave its older sibling in the dust. H1ghlander features a speedy networking capability known as CANbus that allows its multiple microcontrollers to communicate with one another.

Backstory
Although none of last year’s ‘bots came close to completing the entire 150-mile course, Sandstorm was the nominal winner. It effortlessly chewed up seven miles of terrain before getting stuck in a rocky, switchback-riddled part of the course, nearly plunging off a cliff. “We’ve been in the shop for a year and a half now,” Whittaker says, “and the team’s been champing at the bit to get back out there.”

Spotlight tech
The team’s sensor-integration methods-installed on both vehicles-are unsurpassed. Sensors fuse laser and radar data into a composite model of the surrounding terrain that highlights less-navigable areas. The icing on the cake: a separate array of moving sensors that can probe hard-to-see areas that the fixed sensors miss.

Working style
Exceedingly thorough. Over months of tinkering and road-testing, team members have tried to anticipate every possible race-day scenario in hopes of staving off a potential disaster. “The question isn’t just ‘Can you do it?’ ” Whittaker says. “It’s ‘Can you do it on any given day, in any circumstances, under any conditions, on any route?’ “

Piggy bank
Thanks to last year’s success, sponsors such as Caterpillar, Boeing and Intel have been clamoring to have their names associated with the team, and these agreements have translated into a rumored several-million-dollar budget. The team’s high profile has opened up another revenue stream as well-for less than $20, fans can pick up a Red Team T-shirt, khaki hat or 11″x17″ poster at the team’s official Web site.

Odds of winning 20:1.
3:1. Sandstorm has logged more than 4,000 off-road miles and probably has the best shot of any vehicle at winning this race, although Whittaker, known for his military-style rigor, insists otherwise. “Being a favorite doesn’t buy you coffee,” he says. “It doesn’t mean anything on race day.”