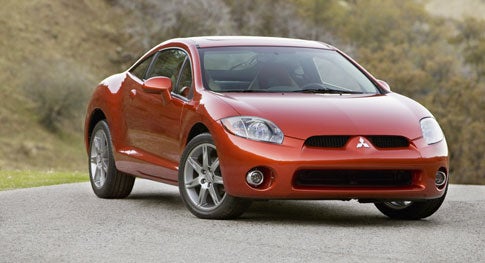 At the 2004 North American International Auto Show in Detroit, Mitsubishi showed an audacious concept car that heralded the arrival of the next-generation Eclipse. The Concept E, as it was called, was an all-wheel-drive hybrid with a completely unique powertrain arrangement: a 270hp V6 drove the front wheels, while a 200hp electric motor powered the rear ones. Everyone drooled.

A year later, the automotive press was all set to drool again, but the debut of the production Eclipse left our mouths a bit drier than expected. Although the forward-thinking design remained largely intact–it’s a head-turner, for sure–the method of putting power to the pavement arrived watered down. Ratcheting down the horsepower or scratching the ambitious hybrid setup would be understandable, but Mitsubishi made its new front-drive Eclipse so highly powered that it may earn the title of All-Time Torque-Steer King.

Torque steer is what happens when the front wheels are overpowered. Because they pivot to steer the car, routing too much power through them can jerk the wheels in either direction if you’re not paying attention or have a less-than-adequate grip on the wheel. The problem gets worse as power increases, and with 263 horses roaring through its front end (few front-wheel-drive cars have that much power, for exactly these reasons), the Eclipse has some of the worst torque steer of any car. It manifests itself most when taking off–go easy on the pedal, or you’ll take about 5,000 miles off your tires in about five feet. In fact, too much gas at any time in first or second gear will net prodigious wheelspin. There is a traction-control button, but it doesn’t help much. And to be fair, that’s not really its job; traction control is meant for limited-grip conditions, not limited-skill drivers.

Now, none of this means that the new Eclipse isn’t fun to drive. Once you get a feel for finessing the throttle, the driving experience can be very rewarding. The car is so high-strung and overpowered (I can’t believe I’m complaining about too much power!) that it constantly feels as though you’re toeing the line between performance and disaster.

On the plus side, the new Eclipse is stunning, and Mitsubishi deserves a lot of credit for staying true to the vision of Concept E. And the good looks come complete with function: The abundance of glass in the cockpit makes for exceptional visibility–there’s almost no blind spot, and the short front end provides an excellent view of the road ahead. With the large sunroof and both windows closed, road noise is minimal. With them open, however, you might want to park under an overpass and rev the engine–it’s the only way you can hear the awesome sound of the Eclipse’s exhaust note. If there is any sound you don’t want to hear, just crank up the eight-speaker, 650-watt Rockford Fosgate sound system. It’s among the best stereos available in this class of car, delivering clean, rich and extraordinarily loud sound.

The seats are supportive, although Mitsubishi cheaped out on the rear ones, opting not to continue the two-tone theme to the rear of the cabin. It’s all right, though, because you’ll want to forget about the rear seats. They’re too small for any adult, and you might not want to let your kids ride in this car.