Inspiration: The Future on Four Wheels (More or Less)

For 64 years, concept cars have wooed and wowed the driving public. Many made empty promises, but the best foreshadowed real technological change. 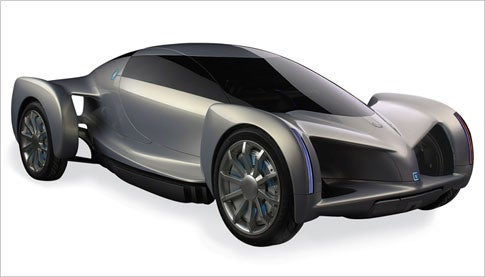 It was a magnificent machine, a stunning glimpse of the future made manifest in Detroit steel. The Y-Job, an experimental Buick roadster that appeared in 1940, is widely considered the first full-blown concept car in automotive history. Its sleek, low, chrome-slathered body parted the American automotive sea at a time when most cars were tall, bustle-trunked Bonnie-and-Clyde rides with running boards and acorn-pod headlights. Yet the Y-Job was not built for bragging rights at car shows, as concept cars are today. It was built so that design chief Harley Earl could drive around Detroit in the coolest ride in town.

In the 64 years since the Y-Job, concept cars have served too many masters and purposes to count. Some have been credible technology demonstrators: automatic and hidden headlights, power windows, cruise control, rearview TV, parking sensors, keyless ignition, LED brake lights, variable-opacity roof glass, navigation systems, rain sensors, folding metal roofs and dozens of other now common features first appeared in concept cars as early as the 1940s. Other concepts have been pure fancy: At the 1996 British Auto Show, a design team from Coventry University displayed Concept 2096, a wheel-less, windowless, driverless vehicle that looked much like something you might find sucking your thigh after you´d waded through a swamp. The power plant? “Slug drive,” which the creators admitted hadn´t yet been invented.

Some concepts have been public opinion polls or previews-Do you like this new design direction? Others have been extreme-makeover versions of production vehicles, designed to answer the “Jeez, what are we gonna do for the Detroit show?” question: next year’s pickup truck, say, but with 26-inch wheels, rubber-band tires, a 15-liter V12 from the company’s earthmover division and a $40,000 iridescent paint job. But the most important goal of the concept exercise is to produce a machine-sometimes a working, rolling vehicle, sometimes a plastic shell-that appears to be an artifact of the future. At a time when every modern car company feels it must have the future in its crosshairs, the concept car retains its potency.

“There’s an arms-race quality to it today,” says David Laituri, a principal industrial designer at the Massachusetts firm Design Continuum, which counts BMW among its clients. “It’s blinding, the sheer number of concept cars today. It’s the price of entry. You have to do something to be competitive.”

In the 1950s-the golden age of the concept car-and the decades that followed, the best of
the concept cars were technology forecasts and testbeds, although designers interested in flash could always simply pimp their future rides by loading cars up with phony jet exhausts, rocket fins and fighter-plane bubble canopies. Today concept car designers are dealing with technologies-wireless navigational networking, for example-that operate under the skin of the machine: They’re invisible. The future needs to be seen to be believed, but the sheer complexity of new technology can be hard to communicate. “One of the reasons hybrid technology is so successful is that it’s fairly easy to understand,” says Alan Mudd, senior designer at consulting firm Design Continuum in Boston. “People understand an electric motor plus a gasoline engine, and they don´t need to know all about regenerative braking. But hydrogen and fuel cells-it’s much more difficult to grasp that technology.”

Still, there have been recent showstoppers.
GM’s Autonomy prototype, introduced in 2002, is probably the most noteworthy of the past decade: automotive design according to a post-internal-combustion-engine paradigm. Autonomy jammed the power plant, fuel tank and steering controls of a vehicle into a six-inch-thick “skateboard.” No intrusive engine, no drive shaft, no bulky fuel tank-for that matter, no fixed place for the steering wheel, and no steering wheel either if you didn’t want one. The skateboard freed designers to imagine snap-on bodies and radical new configurations for seats, control systems and the like. Only problem: The technology is years away.

Even when a concept car is an immediate success, as was American designer Grant Larson’ 1993 Boxster concept for Porsche, turning it into a production model is not always straightforward. In the real world, regulations impinge. “What you can afford to do with a concept car is ignore the legal demands, like bumper regulations, emissions regulations and pedestrian-safety ratings,” says Lars Erik Lundin, vice president of Volvo’ concept center in Camarillo, California. “So you may be disappointed when you go from concept car to real car, because the design suffers.”

Note that Lundin is far from Volvo headquarters in Gothenburg, Sweden. Almost without exception, modern concept cars are designed not by salarymen sitting in Toyota City or cubicled workers in Detroit but by free-thinking stylists in southern California, Barcelona, Milan, Paris and other vibrant culture centers. The sun is bright, and the suits are a thousand miles away. “If you’re in the middle of headquarters,” Lundin says, “your best designers are constantly pulled into fixing production projects. They´re never in peace and quiet long enough to make a concept car. Today’s work is always more important than the future.” Clearly not the right formula for concept car designers: For them, today’ work is the future. 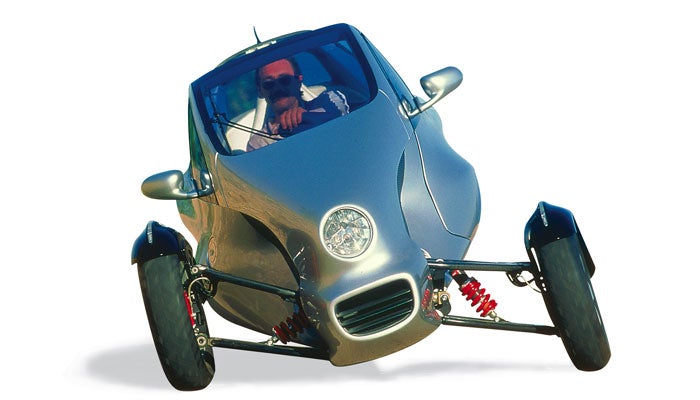 The 1997 Mercedes F-300 Life Jet was a three-wheeled two-seater that leaned into turns like a motorcycle. The computerized Active Tilt Control system sensed speed and driving conditions, then commanded the hydraulics to tilt the car body up to 30 degrees for tight cornering. It was the first concept vehicle to be designed exclusively on a computer. 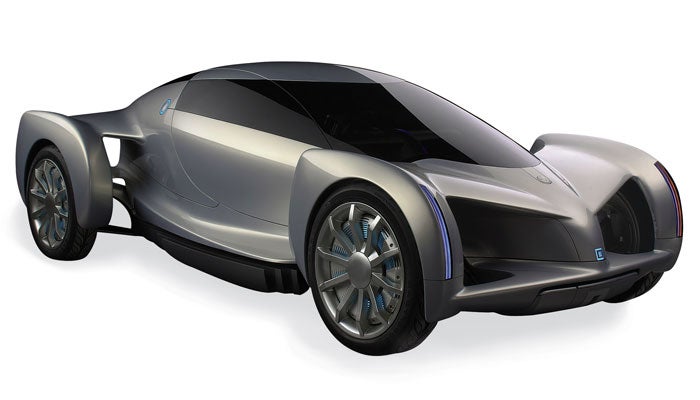 What happens when most of the working parts–fuel cells, electric motors, powertrain, etc.–can be forced into a six-inch-thick “skateboard” that sits below the driver’s and passengers’ feet? Answer: a concept for interchangeable body types and variable cabin configurations that can be snapped onto a common platform. A docking port simplifies the connection, and variable drive-by-wire controls offer an unprecedented degree of customization. In the wildest vision, owners could simply trade in a body–say, a four-person sedan–for a pick-up truck or sports car. Problem: Fuel cells were and remain too bulky to fit into the skateboard and provide the juice required. 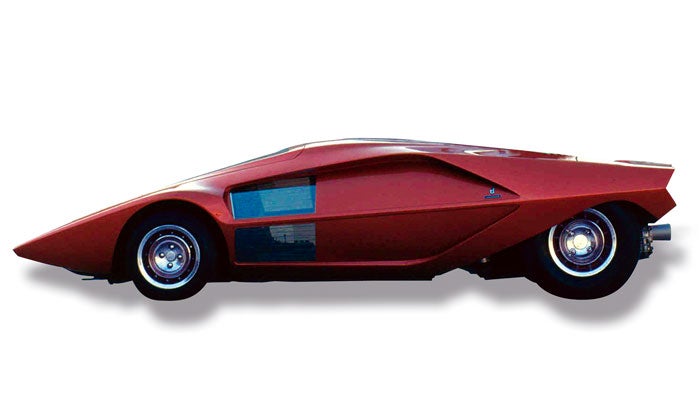 Designer Marcello Gandini experimented with an ambitious aerodynamic form for the midengined 1970 Bertone Stratos. The windshield doubled as the only door in this working concept. The vehicle was the basis for the first-ever purpose-built rally car, by Lancia. Gandini went on to design the famous Lamborghini Countach.

Hybrid cars are associated with pokey nerd-chic city cars such as Toyota’s own Prius, but the elegant carbon-fiber Volta, created by Italdesign for Toyota, runs on a V6 hybrid powertrain that gets 40 mpg. Result: 408 horses, 060 in 4.03 seconds, estimated 150mph top speed. 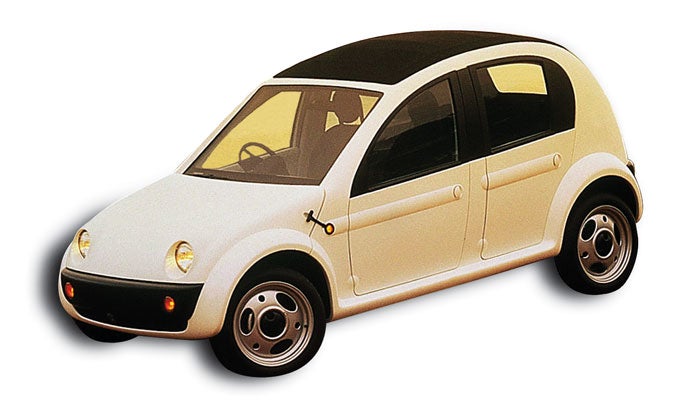 Looking at third-world markets, Chrysler pushed the envelope on lightweight materials and fast construction for its rudimentary Composite Concept Vehicle (or CCV, the name a nod to the lookalike “ugly duckling” Citron 2CV). The body consisted of just four panels made from recycled plastic. The panels were made in less than three minutes using a computer-controlled injection process. The sections were glued together and mounted on a steel frame, a process that cut the number of parts required by 75 percent. 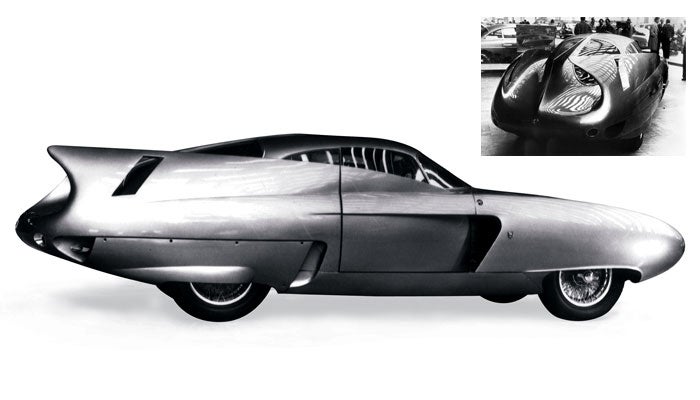 The BAT 7 was the most exciting of the Alfa Romeo BAT (Berlina Aerodynamica Tecnica) series produced from 1953 to 1955 under Bertone designer Franco Scaglione. The signature tail fins direct airflow to the back of the car, holding the drive wheels to the road at high speeds. The design was extraordinarily advanced, delivering a drag coefficient of 0.19 (modern sedans average 0.35) in an era when other concept cars considered “aerodynamics” to be fake rocket exhausts and gunsight hood ornaments.

Though it bore the galloping-horse logo that has graced Mustangs for nearly 40 years, the Mustang I concept car was substantially different from the production model that followed. It reflected Ford’s desire to produce a sporty car, but the company ultimately decided that a two-seater had limited market appeal. The production model, introduced in 1964, had four seats and a front engine, either an inline-6 or a V8, instead of the midengine V4. Dan Gurney did demonstration laps in one of the two Mustang I’s produced, with impressive times at both Watkins Glen and Laguna Seca. 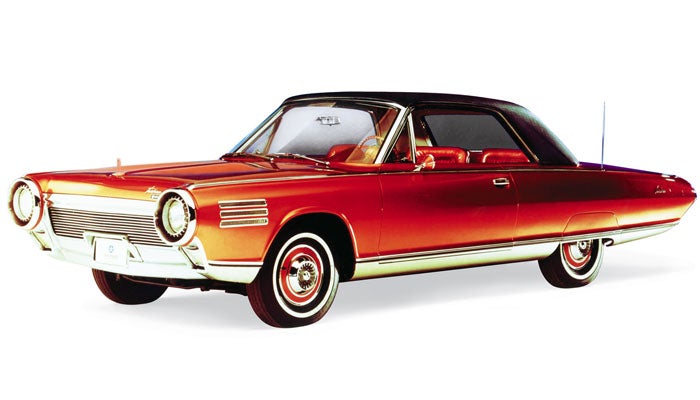 Looks ordinary enough, but there’s a jet engine under the hood. In a 1963 test program, 203 ordinary folks took three-month shifts cruising around in Chrysler/Ghia Turbine Cars (50 were produced). The simple fourth-generation turbine engines, a product of Chrysler research that dated back to the 1940s, ran vibration-free on practically anything that burned, with relatively little required maintenance. The program was nearly successful–most testers said they would buy one if the price were right–but high costs, noise and poor acceleration soured the deal. Chrysler stuck with the turbine engine research for years to come, finally giving up in the late 1970s. 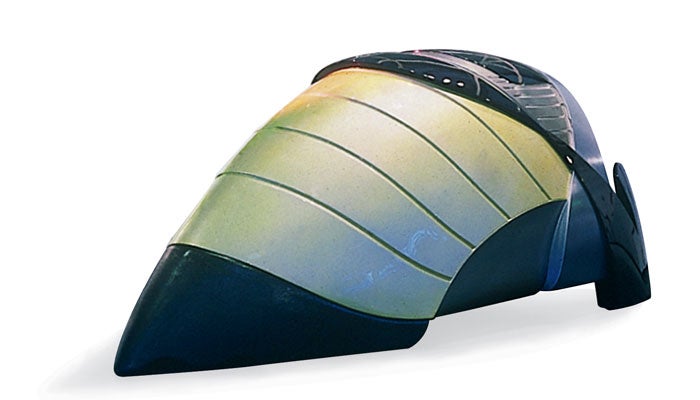 Coventry University students glimpsed 100 years into a future without wheels, windows or drivers to model the teardrop-shaped Concept 2096 for the 1996 British Auto Show. It runs on the mysterious (and totally fictitious) “slug drive.” The ultimate example of all concept, no car. 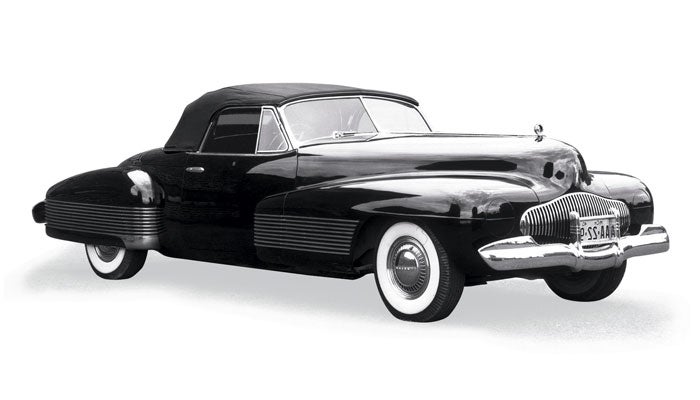 Although concepts and prototypes date to the birth of the auto industry, the 1940 Buick Y-Job, created by General Motors’s Harley Earl and built for his personal use, is widely considered the first full-blown concept car in the modern sense. Earl thought outside of the boxy designs of his day to produce a low, streamlined car with concealed headlights, flush door handles, an automatic convertible top, power windows and an unheard-of horizontal grille.
Vehicles