Cars that think for us! Cars that change shape at will! Cars that scream along underground at twice the speed of sound! Itâ€™s a cinch to predict the future of the automobile. But how do we get there? 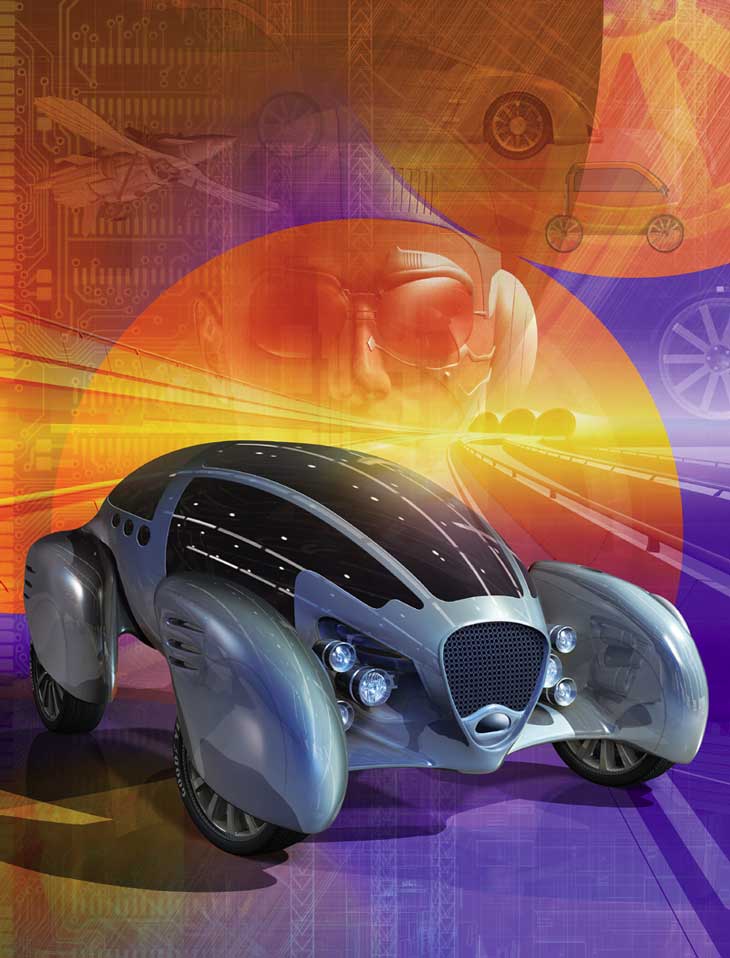 We have reached an odd, maybe unique point in the history of technology, when the distant future is easier to imagine than the more proximate months and years ahead. Fifty years from now, most parties would agree, hydrogen fuel cell technology will power our world-everything from artificial organs to cruise ships and certainly our automobiles. By then we will have figured out how to produce cheap, CO2-neutral hydrogen-perhaps by using renewable energy sources such as wind and solar power to electrolyze water, perhaps with synthetic fuels (bio-ethanol and bio-diesel), perhaps by sequestering carbon from fossil feed stocks such as coal, perhaps with some fairy dust as yet undiscovered. By then the fuel cell industry will be sufficiently advanced to build very compact hydrogen tanks with enormous energy density, and fuel cells that are cheap enough for economy cars and robust enough for chilly northern climates-assuming global warming hasn´t already taken care of that problem for us.

The possibilities are tantalizing. Consider that, if America´s current rolling stock of some 230 million vehicles were powered by fuel cells, the fleet would represent around 17 terawatts of electrical production capacity (assuming an average fuel cell capacity of 75 kilowatts, about the current peak of the unit in the Honda FCX). That exceeds by a factor of 21 the nation´s current total electrical production of about 800 gigawatts. Fuel cell vehicles could be the rolling infrastructure of a new energy paradigm, the ultimate in distributed power generation. When parked, cars with fuel cells could act as pocket power plants, supplying power to the homes and offices to which they are docked, or feeding electricity into local grids during hours of peak demand.

You want some real future-car porn? Fifty years hence, the automobile will be a kind of transportation prosthesis, a semi-organic interface of man and machine that will, with its great reserves of energy and intelligence, be at the center of human existence. Today´s clumsy interface of steering wheel and pedals will be replaced with neuronal seats that will read your mind and navigate accordingly. Road-keeping and collision-avoidance technologies-the synthesis of GPS, traffic tracking, automatic cruise control and braking, and other here-and-now tech-will eliminate the need for “crash-worthiness” as our primitive minds now conceive of it, as rigid but bendable steel construction. The automotive chassis will be built from nanocomposites whose molecules will be arranged for maximum strength and lightness. The skins of future cars will be stretched over the vehicle like a silk stocking, adjusting dynamically according to load-expanding to accommodate four passengers, contracting to envelop the single driver like the suit of a downhill skier.

The automobile will at last fulfill the promise resonant in the words “autonomous mobility.” Mass transit as we think of it now will seem as wrongheaded as eugenics. Automobiles’ quantum-computer cores will be the archives of our memory, our machine adjuncts, our confidantes, in ways so profound and personal as to mock today´s limited PDA phones. We will have merged with our cars.

And they/we will be fast. As speeds increase, aero-tunneling “pores” will open up under the vehicle to increase downforce. The tail of the vehicle will draw back in the windstream, decreasing resistance and enhancing stability. There will be no rigid glass windows. The exterior world will be re-created inside the cockpit with panoptic verisimilitude like that described by David Gelernter in his book Mirror Worlds, offering infrared imagery, magnification, map overlay and other kinds of machine vision-for instance, virtual billboards or menus of restaurants along the route. In many cases, however, there won´t be much to see. By midcentury, dense urban centers will be honeycombed with high-speed transportation tunnels made possible by the kind of automated boring technologies we are seeing emerge now. The dire traffic congestion of Beijing will be a tale of hardship told by parents to disbelieving children. Over-ground highways will be torn down, opening up vast tracts of real estate in land-poor cities. The great cities of the future will be webbed with greenways where once freeways stood.

Speeds inside the tunnels will exceed those of today´s bullet trains. At the entrance, cars will surrender control to automated highway systems that will manage vehicle speeds, merging and spacing for optimal flow. Intercity tunnel conduits-and perhaps intercontinental megatunnels-could be depressurized to reduce aerodynamic drag, allowing speeds that ol´ Chuck Yeager could only dream about.

Well, that was fun. But as I say, that sort of far-horizon prognostication is fish-in-a-barrel stuff. Between here and the utopian ever after lurk dozens of interlocking issues of cost, technology and environmental impact for which there are no easy answers and a lot of complicated arithmetic.

Here’s a for-instance: It appears that in the short term, the hydrogen economy is seriously overdrawn at the bank. We do not now have-or even foresee-an affordable, climate-neutral means of producing hydrogen in sufficient quantities and distribution to achieve energy nirvana in the transportation sector. If you burn coal to generate the electricity needed to obtain hydrogen from water, you´re polluting in order to create a nonpolluting energy source. Indeed, if the goal is greenhouse-gas mitigation, it makes the most sense to begin by tightening emission controls on electrical generation, which accounts for about 40 percent of CO2 emissions in the U.S., compared with 20 percent from cars and light trucks.

Bottom line: Fuel cell technology is gimpy and expensive and is likely to stay that way for years to come. There is a wonderful, probabilistic slap-fight going on right now in journals among engineers, energy experts and policy wonks about just how far or near that time horizon might be.

The technological hurdles to generalizing hydrogen-the sheer scale of the challenge-argue for an effort on the order of the Manhattan Project or the Apollo space program, but don´t bring that up around electric-vehicle (EV) advocates, who are royally ticked off that the car companies abandoned EVs in favor of hybrids and hydrogen research. Why the loyalty? Because even if you count the emissions from the fossil-fuel power plants that charge them, EVs are cleaner than the cleanest hybrids. Not a few in solar-rich California are charging their EVs with roof-mounted photovoltaic panels and wind turbines, achieving in their guerrilla way the ultimate goal of cheap, zero-emission transportation. Others are trying to hide their beloved EV1´s from GM, which began collecting and destroying the leased vehicles after a 2000 recall in which the company said that a design problem with charge ports could cause fires. Honda, too, ended its California-mandated electric-car program in 1999, blaming the demise on feeble consumer demand for the mere 330 cars the company had produced.

EV advocates argue that if only a small fraction of the billions spent on hydrogen and fuel cell research were devoted to battery research, EVs could surmount their greatest obstacle: range. Who’s right? Everybody. Hydrogen doubters are right to question the cost-effectiveness of fuel cell technology to mitigate emissions and dependence on foreign oil; hydrogen backers are rightly optimistic that the technology will emerge to answer the need, as technology always does. But who will win the argument? Follow the money: The oil and car companies are investing heavily in hydrogen research, and these organizations are not known for their dreamy idealism.

While we´re waiting for our hydrogen ship to come in, efficiency is the cheapest and best means to improving energy security, emissions and performance. In the past decade, potent fuel-saving technologies have emerged, such as variable valve timing, common-rail diesel, direct injection and continuously variable transmissions. Hybrid gas-electric powertrains, which capture energy through regenerative braking, offer even more substantial gains.

But automotive engineering will hit a wall: the American love of weight and power. It isn´t only drivers who have been getting fatter in this country. Average engine horsepower has bulked up by 84 percent since 1981, offsetting the engine´s efficiency gains, while average vehicle weight in the U.S. has risen by more than 20 percent in two decades. One argument the auto industry has used against higher corporate average fuel economy (CAFE) standards is that such higher standards would require making vehicles lighter, leaving them less safe in collisions. This position puts General Motors, for one, in an awkward spot. Taking the lead among its Detroit brethren in fuel cell research, GM has promised to bring hydrogen-
powered vehicles to market by 2010, but it´s unlikely that these vehicles will have adequate range unless and until they are made from lightweight materials.

Thus, I boldly venture this near-term prediction: In the next decade, polymer-composite materials, particularly those reinforced with carbon fiber, will emerge from niche manufacturing to be used widely as a structural material. According to a study by Oak Ridge National Laboratory, carbon-composite body construction could reduce vehicle weight by 40 to 65 percent. The new Ford GT is aluminum through and through and accelerates from 0 to 60 in 3.3 seconds, yet the two-seat sportscar weighs more than 3,400 pounds. Think what it would do if it weighed 1,700 pounds.

Meet the Revolution. The brainchild of Amory B. Lovins, CEO of the nonprofit Rocky Mountain Institute, the Revolution (HyperCar is the name of the for-profit company spun off from RMI to promote its ideas) is a computer-modeled concept for an ultralightweight vehicle that, Lovins says, illustrates the potential of carbon-composite vehicles. The Revolution would be constructed using a process Lovins calls Fiberforge, which stamps out carbon-fiber blanks and layers them assembly-line-style in large molds, into which resins are injected at high speed. McLaren is using a similar process to build its Mercedes-Benz SLR supercar.
Lovins´s conceptual fuel-cell SUV would be about the same size as a Lexus RX330 and would offer the same amount of interior space and comparable safety and performance, but would weigh about 1,900 pounds, a little more than half as much as an RX330. Lovins predicts that the vehicle would have a torsional rigidity 25 percent higher than premium sportscars and pass all federal crash requirements.

Similar approaches are being developed in the U.K. in a project called the Aero-Stable Carbon Car that involves, among other groups, Lotus Engineering. The ASCC project has patented a process wherein bundles of foamcore sleeved with carbon fiber are impregnated with resin and bonded together to form parts of a composite spaceframe.

Besides weight, another big drain on the efficiency of an automobile with an internal combustion engine is heat. Only about 20 percent of the energy content of gasoline reaches the driven wheels; more than half is wasted in the engine as heat. What if you could recapture that energy and turn it into electricity? The Borealis Company, based in Gibraltar, has patented a â€thermionic automobile,â€ which uses waferlike devices based on something called quantum mechanical tunneling to convert heat to electricity.

Sounds neat. Where can I buy one? Ah, but that´s the problem with the future: It´s never around when you need it.

Whatever the future brings, one thing has already changed, and it is so fundamental that we might not have even noticed the changing. Gone forever is the time when we thought of a car as discrete from the world in which it operated. Consumers are beginning to understand the automotive ecology, and it runs deeper than greener-than-thou Hollywood stars glorifying themselves by buying Toyota Priuses. Guilt-low-voltage but steady-must nag at the lone driver of the supersize SUV as he fires up the six-liter engine in his three-ton truck (12 mpg city, 16 highway) for his morning commute. Perhaps he turns the key and looks at the sky.

The automobile is, after all, not just a machine but the tangible part of a global energy system, vast and abstract and hard to comprehend. But we are starting to get the picture.