What your car knows may be used against you.

When an oncoming train struck a Cadillac at a Georgia railroad crossing, three occupants were killed. The lone survivor filed a $12-million wrongful-death claim against the railway,
but her case was quashed by an unusual “witness.” The jury rejected the survivor’s suit after hearing evidence downloaded from the car’s onboard data recorder, or “black box.” The device revealed that the car had stopped on the tracks before it was hit.

This case, decided in 2002, was among the first in which an automobile data recorder played a pivotal role. But it won’t be the last: Black boxes, long required in airplanes, are now standard in more than 65 percent of new cars.

General Motors began installing black boxes in the 1970s as part of the airbag system. The devices continuously monitor information such as speed,
G-forces and seat-belt tension to determine when a crash is imminent. But unbeknownst to most drivers, black boxes preserve these details for the seconds preceding an airbag “event.” In recent years such data have been cited by prosecutors in criminal trials and by
carmakers in product-liability suits–to show that drivers were speeding, for example, or not wearing seat belts.

The jury is still out on whether drivers “own” their black-box info. Attempts by the feds to require the boxes and standardize their data sets have so far been rebuffed. But last year, recognizing this new potential for privacy invasion, California became the first state to require
a court order to download black-box data without owner consent. 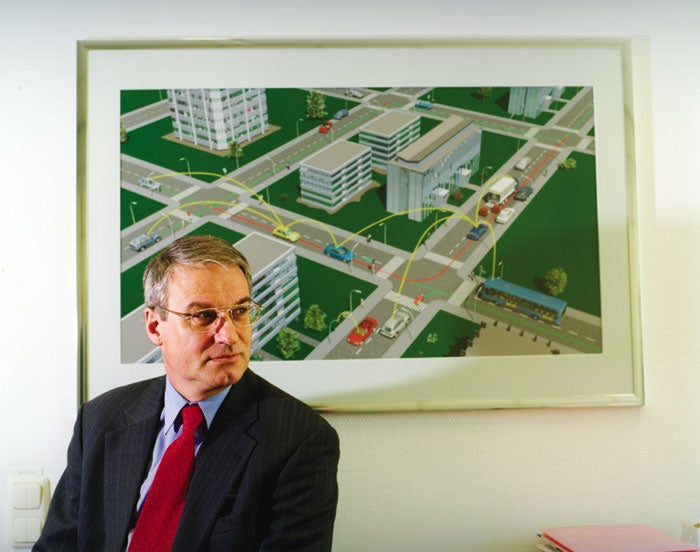 Raymond Freymann of BMW with one concept for a traffic radar network. 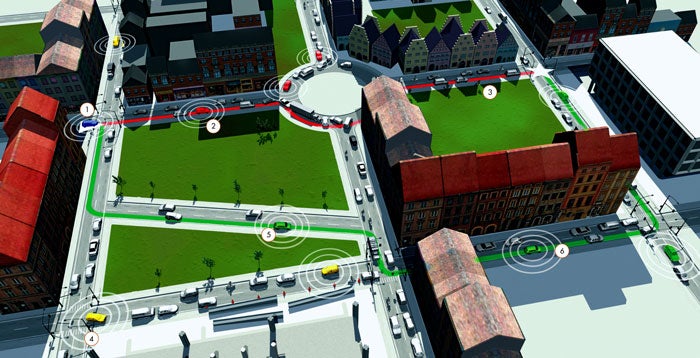 The idea behind “traffic radar” is simple: Other cars report where they are and how fast they’re going; your car takes that data, figures out where the traffic is, and routes you around it. Imagine you’re in the blue car on the left [1]. Many of the cars nearby are broadcasting their position and speed to you wirelessly. Slow-moving cars [2] clog the most direct route to your destination [3]. Cars on nearby roads are moving a bit faster [4], while others move even more quickly [5]. Your navigation computer uses this information to reroute you onto the fastest path [6]. 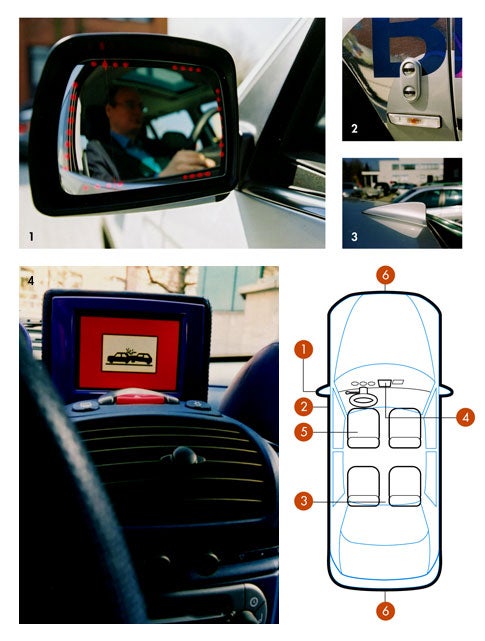 Elements of the Intelligent Ca

Future cars may be fitted with sensors and warning systems including [1] a mirror that lights up when a car is in the driver’s blind spot, [2] a LIDAR sensor that uses laser beams to measure the distance and speed of approaching vehicles, [3] an antenna for communicating with other cars via wireless radio networks, [4] a GPS navigation system that warns the driver of hazards ahead and plots alternative routes, infrared sensors that watch lane markers and signal the driver’s seat to vibrate when the car drifts too far to one side, and radar sensors and video cameras that check for potential collisions. 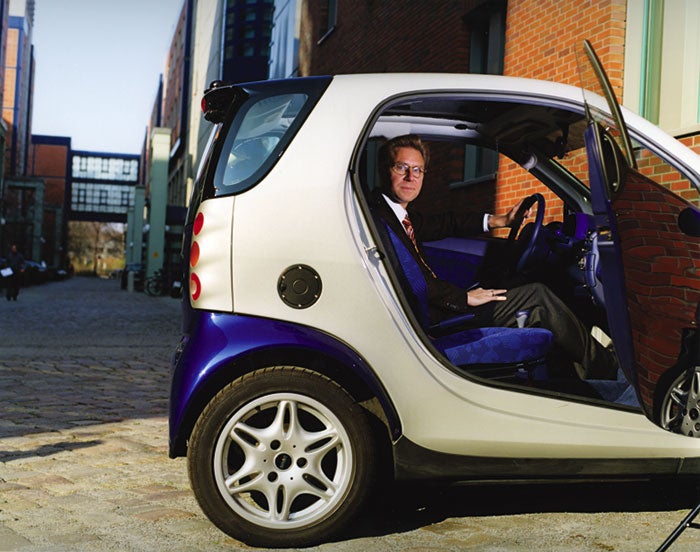 Ralf Herrtwich of Daimler-Chrysler in a Smart car that talks to its “friends.”
Cars