Will we ever cheer driverless racecars? 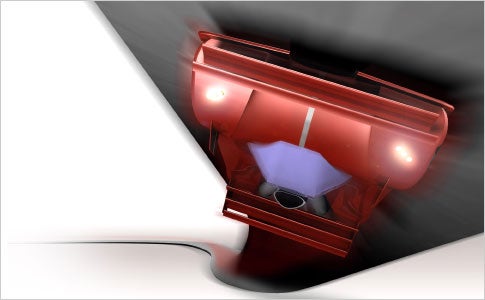 When racecar engineers dream of a perfect world, they don’t imagine Britney Spears disrobing from a Sparco fire suit. What they fantasize about is a universe without the prima donnas behind the steering wheels. “The driver is not your friend,” says Kia Cammaerts, who creates racing simulations.”Because unless he’s [world champion] Michael Schumacher, all he’s doing is slowing the car down.” So would engineers ever attempt an automotive version of Deep Blue, the supercomputer that in 1997 humbled chess champ Garry Kasparov?

Computers already influence vehicle dynamics: when sensors detect tire slip, for example, the problem may be resolved without driver input. But total computer control? “Racing isn’t as clear-cut as chess,” says Jim Hamilton of Chip Ganassi Racing. Deep Blue was a static exercise; racing involves many shifting variables–from fuel load (which affects weight) to humidity (which affects power)–not to mention the challenge of responding to other cars on the track.

The recent DARPA Grand Challenge unmanned-vehicle race is a case in point. Despite sophisticated sensors and GPS systems, over half the ‘bots didn’t get past the starting line. Many floundered on undetected obstacles; their onboard computers were unable to “see” and react the way people do instinctually. “It isn’t just getting the algorithms to work,” says Dave van Gogh, head of the Caltech team. “It’s getting them to work together at the same time.”

These tech limitations will quash robotic motorsports, at least for now, van Gogh says: “Getting the speed up will be difficult, and watching robot cars go around a track at 30 mph could get boring.” On the other hand, eradicating the human interest in self-preservation might have some entertaining, if unintended, consequences. “You’d have the occasional spectacular wreck,” Cammaerts says, “especially if the cars are based on the Windows [operating] system.”