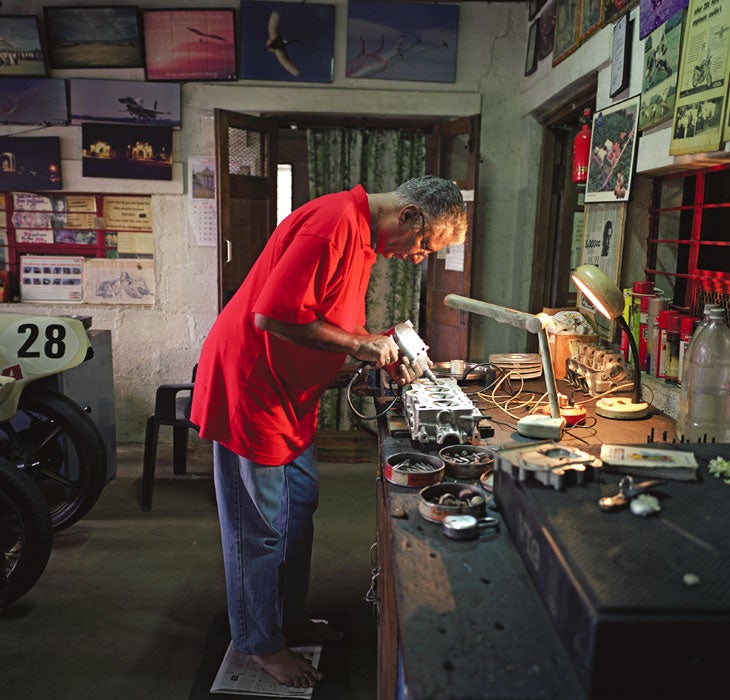 “I am no great genius man, no man with letters after his name,” Somender Singh says, “and what I have invented is really very simple.” At his workbench in Mysore, India, he uses a Dremel tool to work his magic.

In India, rush hour can take all day. Lanes and red lights are only suggestions. The streets brim with pedestrians, cyclists, cars, trucks, buses, garbage, ox-drawn carts, rickshaws, vendors and wandering cattle. Setting aside the teeming throngs, around half of the streets are also unpaved. In 2001 just over 80,000 people died in fatal auto accidents–an average of one death every 6.5 minutes. That year, the government in Delhi, where these hectic conditions are worst, issued a (mostly ignored) ban on cellphone use while driving. Not just anyone can brave the heaving avenues. Chauffer-driven cars make backseat drivers of their owners, so the backseat has become roomier and more accessible in vehicles designed with India in mind.

Despite the traffic nightmare, the Indian auto industry is booming. Indian car exports have more than doubled since 2002. India has become a major manufacturing site for the likes of General Motors, Ford, Honda and Toyota. Ford alone produces 50,000 units per year at its Indian plant, drawing on the country’s healthy auto-components industry to produce the Ikon with 80 percent local content. Meanwhile, with a growing middle class–thanks to significant American outsourcing efforts to India–in the world’s second most populous country, there is increasing demand for autos, SUVs and luxury cars (Audi opened its first Indian dealerships in July).

Despite what India’s dense traffic might suggest, there are relatively few car owners: about 13 motor vehicles per 1,000 people in India, as opposed to 798 vehicles in the U.S. and 554 in Japan. Many still travel by compact, three-wheeled auto-rickshaws. These auto-rickshaws have found their niche in the crowded streets, able to squeeze their noses into tight spaces and run on CNG (compressed natural gas, Delhi’s government-mandated fuel for auto-rickshaws and buses since 1998), gasoline or improvised fuels such as kerosene mixed with engine lubricant. Compared with these lithe traffic negotiators, even the most modest modern auto is a lumbering behemoth. The Ford Ikon, produced especially for the Indian market, is about four feet longer and nine inches wider than a midsize rickshaw. The Ikon is manufactured and sold in India, with kits shipped to Mexico and South Africa. The best-selling car in the country’s history, the Maruti 800, is no wider than an average auto rickshaw, and just under 20 inches longer. India’s Mahindra & Mahindra, an automotive and farm-equipment company with plants in Indonesia and Uruguay, released the Scorpio, an SUV now exported to countries in Asia, Africa and the Middle East.

But changes are afoot. Soon India will boast an extensive national highway system, starting with the “Golden Quadrilateral,” a 3,816-mile circuit connecting the four major urban centers: in the north, Delhi (population 10.2 million); in the west, close to Bangladesh, Kolkata (Calcutta, pop. 4.8 million); in the south, on the Bay of Bengal, Chennai (pop. 4.2 million); and on the western coast, Mumbai (Bombay, pop. 12.4 million). Already 46 percent complete as of April, the Quadrilateral is scheduled to be nearly ready by January 2005. Cars will finally have someplace to go.