In a field of teams using off-the-shelf tech, one delivered true innovation. 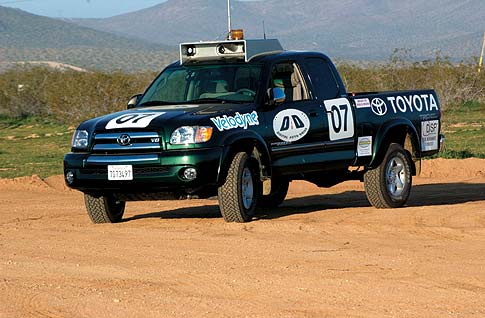 In a field of teams using off-the-shelf tech, one delivered true innovation.

DARPA ultimately cares little about the fate of civilian robots in the Mojave Desert. Yet it cares very much about the development of new robot technology, technology that will enable unmanned vehicles to autonomously monitor their surroundings, avoid boulders and potholes, and race to targets. By those criteria, the race did have a winner: Digital Auto Drive of Morgan Hill, California, which developed an innovative new robot vision system that, team leaders claim, nearly won them the race.

In theory, the team´s strategy is simple: Avoid the struggle to combine data from multiple â€activeâ€ sensing systems like radar and lidar. Create a real-time 3-D map of the course in front of the vehicle with video cameras alone. Choose a safe path through the upcoming terrain, then point the steering wheel down that path. Now do it while flying through the desert at up to 60 mph. The team, led by engineers David Hall and his brother Bruce, mounted two digital video cameras atop their 2003 Toyota Tundra. A processor transforms the images from the cameras into a 35-billion-pixel terrain map, and redraws that map 60 times a second. For each one of these updates, another processor creates up to 100 possible paths through the terrain, then rates each path based on how flat is is, how close it is to the DARPA-defined course, and the size of the obstacles on that path. (The team completely avoids the problem of object recognition by treating every bush like a boulder, and avoiding both.) Repeat the process 60 times a second: 35 billion pixels, 100 paths.

Yet for all of D.A.D.´s innovations, a football-size rock lodged under a tire and ended its journey at mile 6.0. The team´s downfall lay not in its stereoscopic image system. Rather, a feedback loop wasn´t set properly, and the computer didn´t provide enough gas to barrel over the rock. Disappointing, yes, but the team remained optimistic. â€If we only had two more programming days,â€ says Bruce Hall, â€we would have completed the course.â€