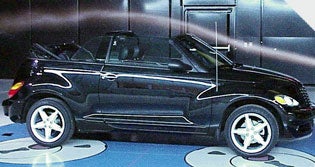 When Chrysler stylists put a basket-handle “sport bar” atop the new PT Cruiser four-seat convertible, they intended no more serious duty for the hydroformed steel hoop than to add some stiffening and keep the car from looking like a rolling claw-foot tub. It was a cute but basically nonfunctional styling item–never intended to be a roll bar and not part of the convertible-top mechanism.

But when they put the Pete into Chrysler’s wind tunnel, a synergistic benefit became apparent: The airfoil-like sport bar rebounds the airflow that comes over the windshield before it tumbles into backseat turbulence. You’ll still have a bad-hair day at highway speeds in the rear seat of a PT droptop, but far less so than in its VW New Beetle and Ford Mustang counterparts.