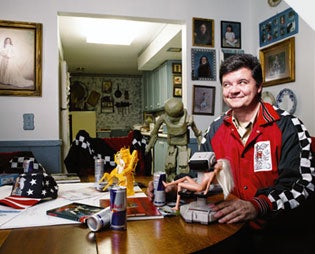 Grayson in the AIM command center.

When DARPA announced that the Grand Challenge was open to anyone who could put together a reasonable set of technical papers explaining how, in theory, their package of software and sensors worked, it was an invitation to dream. On paper, a tech-savvy Lone Ranger could look as plausible as robotics powerhouse Carnegie Mellon.

Consider Paul Grayson, 53, head of American Industrial Magic, one of 45 teams that made DARPA’s initial cut. Grayson is a former steamship engineer who trained at Purdue and in the Navy, but for the past seven years he has made do working “below his skill set,” as he puts it, at an $18,000-a-year job repairing golf carts at a resort in Traverse City, Michigan. “I fit sideways in the world,” Grayson admits. He seized on the Grand Challenge as his ticket to the big time, and by the fall of ’03 he was a force in the competitor chat rooms that had sprung up and a favorite at DARPA, whose PR liaison unfailingly directed reporters looking for a good underdog story his way.

Alas, by early December, Grayson’s effort had collapsed. His technical papers were basically a bluff, a bid for the time and credibility he needed to gather enough money and material to build what he’d described. On the positive side, a retired Army officer from Pennsylvania offered to donate an old Army surplus truck to serve as one of the team’s race vehicles, along with the old sand-rail dune buggy in Grayson’s front yard. But the strain of holding together a complex organization, including a global Internet coalition of software programmers, from the TV room of his modular home began to tell. And larger forces intervened. “My wife said, ‘If that truck arrives here,
I will leave you,'” Grayson explains.

Things fall apart. For now, Grayson is pinning his hopes on a civilian clone of the DARPA Grand Challenge that he’s helping to organize. The director of the new organization, the International Robot Racing Federation, is Las Vegas computer consultant Ron Fink, another Grand Challenge rejectee, recently divorced, who has staked all his dwindling resources on launching an inaugural race in late September. “That’s the kind of commitment you need,” Grayson says approvingly.