From the Popular Science Archives: September1923

Auto enthusiasts envisioned high-speed tankers that pumped on the go. The idea did not catch on -- except in the air. 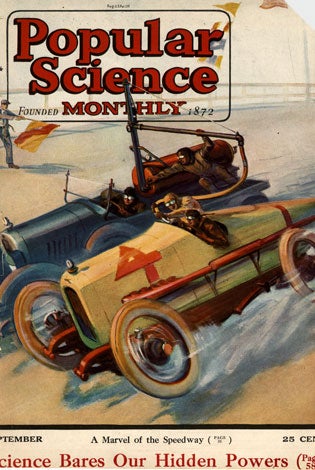 Scattered among history’s bright ideas are technologies that were doable yet not worth doing — like on-the-fly fill-ups for automobiles. In a 1923 cover story, we reported that a new supply car had enabled another auto to drive 3,155 miles in 50 hours at the Indianapolis Speedway without stopping to refuel (though it still had to pull over for tire changes). Why bother? Automotive and aviation developers alike were obsessed with setting endurance records, in part because at the time, places to refuel were few and far between. The same article described a breakthrough in which four army aviators transferred fuel from one deHavilland DH-4 to another while “rushing through the air at a speed of 90 miles an hour.” Early systems were tricky, with tanker planes sometimes unable to haul the hose back in; in one test, a pilot was forced to land with a 48-foot hose “dangling under his machine.” On-the-road refueling never caught on, but the inflight version became a staple of military strategy.

Other stories from the September 1923 issue:

The World’s Most Powerful Machine Gun

The new .50-caliber Browning machine gun would see extensive action in WWII, Korea and Vietnam. It fired 500 rounds per minute and had an effective range of 6,000 feet.

Insulin — A Miracle of Science

Medical trials using insulin to treat diabetes were a great success. Frederick G. Banting, who discovered the hormone in 1921, won the Nobel Prize in December 1923.

A Model Operating Room for Animals

The University of Pennsylvania Veterinary School boasted modern surgical methods as advanced as those used on humans.

Before the mechanical bull, there was this: a car sporting a saddle bolted to its frame, and rear wheels mounted 3 inches off center. It gave thrill seekers a tooth-rattling ride.