A New Home Opens for Some Long-Lost Treasures of Aviation

The National Air and Space Museum in downtown Washington, D.C. 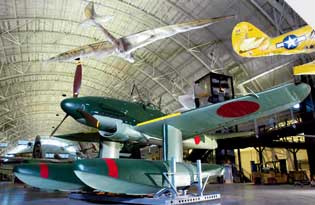 This Japanese Aichi M6A1 Seiran is a WWII bomber designed to operate from a sub.

The National Air and Space Museum in downtown Washington, D.C., is the most visited museum in the U.S., but it long ago ran out of room and was forced to put many of its prized aviation artifacts — the space shuttle Enterprise, the Enola Gay, the SR-71 Blackbird and scores of other airplanes and space vehicles — in long-term storage, hidden in darkened hangars. Those historic airplanes are finally seeing the light of day.

This month, to mark the centennial of powered flight, the museum opens a gigantic annex, the Steven F. Udvar-Hazy Center, at Washington Dulles
Airport, 25 miles from downtown.

The highlight is a 760,057-square-foot hangar, basically a cavernous candy store of aviation wonders. A weathered but stunning Air France Concorde arrived in June, and August brought the gorgeous yellow-and-brown Dash-80, Boeing’s 1954 prototype of the groundbreaking 707 airliner. A Boeing 307 Stratoliner, the world’s first pressurized passenger liner, comes fresh from an emergency restoration after it crash-landed in Seattle’s Elliot Bay during a test flight last year. The American and Russian fighters that faced off over Korea sit nose to nose. There’s a fantastic, bright-yellow Northrop flying wing, and a wood-finned German WWII surface-to-air missile.

The Enterprise, the first space shuttle ever made, will not go on display
for a few months, however: The prototype shuttle, which was used for atmospheric testing and never launched into space, had to be partially disassembled to aid the investigation of the Columbia tragedy.

If that’s not enough to get downtown tourists into their cars for the drive out to suburban Virginia, the museum offers one view they’ll never get at the reflecting pool: a pilot’s-eye look at the airline traffic coming in and out of the airport, courtesy of the center’s 164-foot-tall observation tower.