Now available in the U.S.: Not one but two rally-inspired sports cars for real-world driving. How do they score against each other? 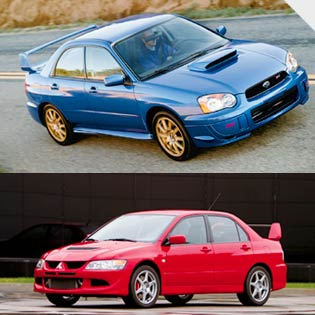 The Subaru Impreza WRX STi and Mitsubishi Lancer Evolution, which hit dealerships earlier this year, offer more performance bang for the buck than any other cars sold in the U.S. Inspired by the half-million-dollar monsters
Subaru and Mitsubishi assemble for World Rally Championship races, the STi and Evo aim to prove?with turbocharged four-cylinder engines, four-wheel drive, sticky tires and monster brakes?that nothing succeeds like excess.

The STi’s 300 horses run through a slick, close-ratio six-speed gearbox, so the car accelerates like a Corvette. In keeping with WRC practice, the center differential is active: A computer tweaks handling characteristics by reapportioning power between front and rear wheels, and the driver can adjust the settings. Another rally-inspired system spritzes the intercooler with water on demand. The Evo is less powerful (271 hp), lacks an active diff (though it does have the nifty spritzer), and aside from its super-size carbon-fiber rear wing seems nondescript compared with the STi, whose hood scoop is large enough to swallow birds whole. Surprisingly, though, the Evo feels more like a racecar?lighter, sharper, more responsive. Though both cars have been sold in Europe and Japan for a decade, automakers didn’t see much of a U.S. market for rally-inspired cars?until Subaru’s WRX proved them wrong two years ago. Essentially an Impreza fitted with turbo, upgraded suspension and rally accoutrements, it was an immediate hit.

Gearheads obsessed with performance will buy the STi and Evo so they can zoom away from stoplights and tear into corners at outrageous drift angles. Will they feel like they’re in a real rally car? No way. Not because the cars don’t have the power?they’re actually faster than most entry-level rally cars?but because you can’t drive on the street the way you would in a race (unless you’re looking to get arrested). Still, these new speedsters are as close as most of us will get to the real thing.