The automaker's MMI is supremely capable and, more importantly, comprehensible. 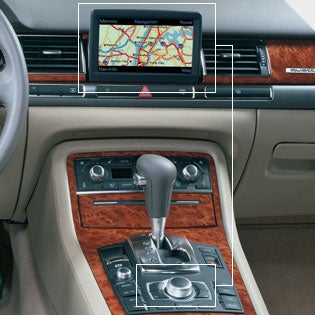 Enough has been written about BMW’s iDrive to fill a 1,000-page driver’s manual. Then again, iDrive owners need a 1,000-page manual to figure out how to use it. Credit Audi for succeeding where the vaunted Bavarian firm failed. After a week driving Audi’s new 2004 A8, we can report that the carmaker has created an electronic driver-car interface that is genuinely intuitive. The iDrive was just too clever. The menus within menus, the complex haptic-feedback mouse/knob device, and the labyrinth of subsystems all made easy tasks like changing a radio setting far too complex. Audi’s MMI (Multi Media Interface), on the other hand, is a constellation of simple menu-selection buttons and a knob; you rotate the knob through a list of options onscreen and then press it to make your choice. The system controls navigation, audio, acoustic parking warnings, adaptive air suspension, lighting, mechanical diagnostics and a host of other functions. You’re rarely more than two menus deep, and there’s a handy Return button to bring you up a level should you get lost. In the course of only one spin around town, using the MMI became second nature. As cars integrate more systems and provide fewer dashboard controls, Audi’s interface is the one to imitate.