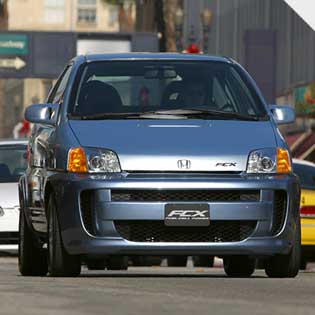 In April we got behind the wheel of the Honda FCX, the first fuel cell vehicle to receive U.S. government certification for road use. There was little about our 20-minute test drive that was extraordinary, and that’s a compliment: We were impressed that Honda has managed to make a hydrogen-powered car that looks and rides much like the dependable Civic we all know and love.

Sure, there are differences: The three-door FCX is slightly taller than your average hatchback (to help accommodate the two large hydrogen tanks between the rear wheels), and on the dashboard there’s a kilowatt meter instead of a tach. Otherwise the FCX looks like any three-door you’ve ever met. The biggest difference we noticed was when we turned the key since the electric motor makes virtually no noise.

The streets of Manhattan require rapid acceleration and speedy maneuverability, and the FCX was hardly a slacker. Honda says the car puts out the equivalent of 80 horsepower, which isn’t much, but the motor generates an impressive 201 pound-feet of torque. And since electric motors deliver maximum torque from the moment they’re activated, the FCX handled just like a peppy four-banger. Some of this pep comes from the FCX’s Ultracapacitor, a rapid-discharge unit that stores power generated from the fuel cell and captured from braking.

The car’s range is about 170 miles, though that could increase by 60 percent if Honda can improve the hydrogen compression from 5,000 psi to 10,000 psi. Of course, there’s nowhere to refuel the FCX right now (the city of Los Angeles is the sole leasee of the five FCXs in this country). But should the infrastructure come into place (think decades, not years) a car like the FCX could succeed. From the driver’s seat, it isn’t all that different from anything on the road today.