Rolls Over, Keeps On Fighting 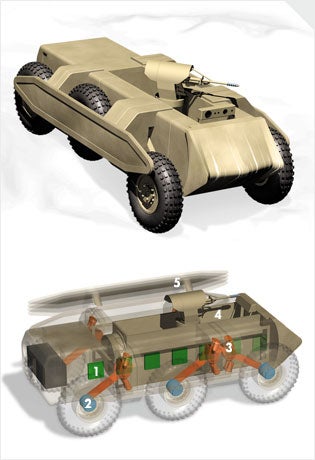 The topsy-turvy, Humvee-size Spinner — which sports a rotatable payload bay and a remarkable inversion-recovery technique — is the prototype for what may be the Army’ first purpose-built robotic combat vehicle. “I describe it as “Robot Wars´ on steroids,” says Charlie Guthrie of Boeing Unmanned Systems, which is helping Carnegie Mellon University’ Robotics Institute develop a prototype of the vehicle for the Defense Advanced Research Projects Agency. “It’ big, and it’ designed to take a real pounding.”

Unmanned aerial vehicles (UAVs) are a familiar part of the military’ armory, but unmanned tanks have yet to advance much beyond the realm of science fiction. “Air is much more forgiving because there’ not much to hit,” says John Bares, director of Carnegie Mellon’ National Robotics Engineering Consortium. “But when you´re slogging through a forest at 30 mph and you make a little mistake — Bam! You hit a tree.”

The Department of Defense’ Future Combat Systems program calls for the deployment of terrestrial robotic technology as soon as 2010. Unmanned ground combat vehicles (UGCVs) like the Spinner could be used as motorized mules to ferry materiel to the front lines, but they can also conduct everything from armed reconnaissance to medical evacuation from the battlefield without risking soldiers´ lives. “Our premise is to exploit the fact that it’ an unmanned vehicle,” Bares says. “(Most) vehicles are designed to support and protect the guys inside.”

Freed from that constraint, the Spinner’ designers created a rough-and-tumble prototype that’ meant to negotiate obstacles as tall as 3 feet and survive major upsets. Six individually powered and independently suspended wheels, built by Ireland’ Timoney Technology, maximize traction and redundancy while lessening the likelihood of high-centering (getting stuck on vertical obstacles). The aptly named Spinner also has an ingeniously designed suspension that enables it to recover from rollovers: It can reorient its wheels and payload a full 180 degrees. “It’ an invertible machine,” explains Bares. “There is no right-side-up.” (The Spinner’ designers won´t divulge how the novel suspension works because they are seeking to patent it.)

The testing program stipulates that the Spinner must be able to cover 450 kilometers without refueling during a two-week mission. To achieve the necessary fuel efficiency, designers opted for a hybrid powertrain created by Huntsville, Alabama-based PEI Electronics. Liquid-cooled electric hub motors drive each wheel. Lithium-ion batteries, in turn, are powered by a 60-kilowatt turbine.

The Spinner is slated to begin testing early this year as a radio-controlled vehicle. Later, it will be “tele-operated” via video images generated by onboard sensors, and eventually it could operate semiautonomously. But the Spinner is unlikely to become a truly self-sufficient robot anytime soon — though its technology could lead there — because of the limitations of today’ sensors. Rocks and trees are one thing, says Scott Fish, DARPA’ UGCV program manager, but “the ability to detect what we call negative obstacles — trenches and cliffs, for example — is another issue.”