How About an Urban Aerial Utility Vehicle? 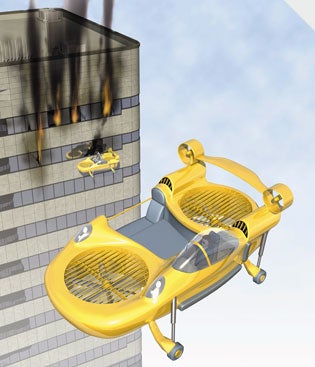 In the race to build a so-called personal flying machine, few developers have got much past the tethered-hop stage, with promises of one in every garage sometime soon. Generations of hopeful flyers have died waiting. But Israel’s Urban Aeronautics at least addresses a key point: A machine like the X-Hawk concept shown here (which the company recently released, saying it’s the design they’ll build) has less chance of serving your average frustrated commuter’s needs than of playing a utility role in commercial and government transport. Projected uses include urban rescue, repair and patrol. The ducted fans mean the machine can safely approach tight areas where helicopters can’t go — for example, as the company’s literature ominously notes, up against “a high-rise building in New York City.” Urban Aeronautics claims it is fast-tracked to actual flight testing because it will build X-Hawk around already-FAA-approved engines and rotors, and says it has received a patent. If that doesn’t fly, there’s always the military: The company, with a retired commander of the Israeli Air Force on its board, says it’s working on a bigger TurboHawk design. www.urbanaero.com