Heads up: Civic at 3 O'clock 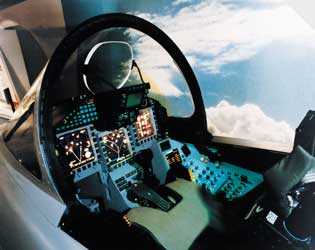 Carmakers can learn a lot from designers of cutting-edge aircraft cockpits. It’s all about human factors: keeping hands on the wheel, eyes on the road. Managing and monitoring too many systems places both pilot and mission at risk.

“It starts with the KISS principle-keep it simple, stupid,” says John Dobbs, lead cockpit designer for the F-22 Raptor Pilot Vehicle Interface. “If the pilot doesn’t need to know something to complete his mission, we don’t tell him.” Warning lights and sounds are reduced: If a pilot shuts down the engine, he doesn’t get warnings about low hydraulic pressure because the plane knows what’s going on. “Sensor fusion” means that target-tracking data from the infrared, data-link, and radar systems are integrated so the pilot sees one target on the screen, not three. The Raptor combines a head-up display with a throttle and joystick that have more buttons on them than a PlayStation controller, so the pilot can fly and operate the avionics simultaneously. The Eurofighter Typhoon adds direct voice input. Craig Penrice, a Typhoon test pilot, says, “It works bloody well, like a second pair of hands.”

Given heavy traffic loads down here on Earth, cockpit design may be even more critical in cars. “We have the benefit of three dimensions and less traffic in the air,” says Penrice. “On the road, you’ve got to have your head out of the car and looking where you’re going, otherwise you’ll kill people.”