Tricked-up right out of the factory, and aimed young. 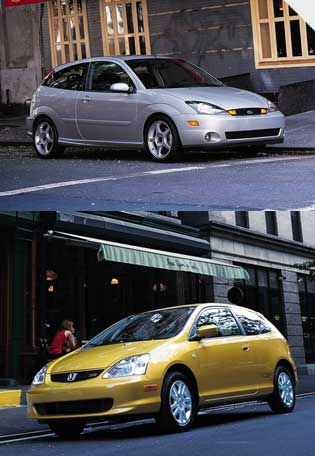 The Focus SVT (top) packs in the tech, creating a vehicle that’s a driver’s delight. The Civic Si (bottom) is a rocket right out of the box, in the spirit of its highly modified ancestors.

Build a car well, and it’ll be successful (see Toyota Camry). But create a culture around it, and it’ll be a legend (see Corvette, Viper, Mustang). So it was just a matter of time before Ford and Honda looked at the growing numbers of buyers modifying their products and wondered: “How can we get a piece of that?”

The answer is the Ford Focus SVT and–returning this year after a brief hiatus–the Honda Civic Si, entry-level cars kicked up with performance enhancements by in-house teams of engineers. The goal: Offer one-stop shopping to those who want the high performance of an aftermarket mod without the hassle of turning a wrench.

The Focus SVT follows in the tire tracks of the SVT-tuned Mustang Cobra R and F-150 Lightning, squeezing a 170-horsepower engine and 6-speed Getrag transmission into what was already a competent economy car. The engine incorporates variable valve timing, two-stage variable intake runners, and a dual-mass flywheel to maximize power–technology that belies its sub-$20,000 base price. The result: pulling power through the rev range, and a smooth, quiet demeanor. Ford’s team also beefed up the suspension, brakes, wheels, and tires, creating a genuinely fun-to-drive vehicle. In our tests, the Focus outaccelerated the lighter Civic Si and demonstrated razor-sharp handling, nearly pulling a full G in corners.

Honda’s reputation for technical prowess is hard-earned, so any car with the Civic Si moniker is sure to be a good one. This latest offering introduces the first rally-inspired dash-mounted shifter, ensuring the driver’s hand leaves the wheel for only a split second to change gears. During our tests, the Si’s 160-horsepower iVTEC engine was enthusiastic but uncomfortably more raucous than the Focus’s. And its 5-speed manual is no match for the Focus’s six-pack. The Si’s handling is notably crisper than a regular Civic’s.

Bottom line: These are both very good cars, but don’t look for many Vin Diesel types driving them off dealer lots. For all the enhancements, both are still a bit, well, ordinary. That said, they both represent dramatic improvements over the base models that spawned them. Consider them credible top-of-the-line models: fast, fleet, and affordable.