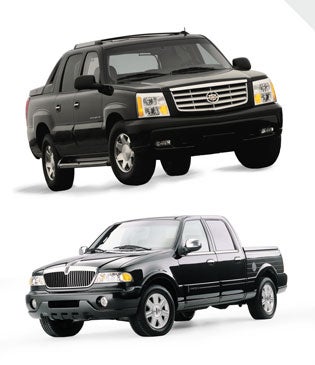 Pickup trucks far outsell cars. SUVs are still hotter than the asphalt at Daytona. Many of Lincoln and Cadillac’s current customers also own another automaker’s truck. If you’re one of these companies’ top executives, how can you not decide to start building pickup trucks?

There are 30,000 reasons not to, of course-that’s the dollar premium these companies charge over a conventional truck for either the Lincoln Blackwood or Cadillac Escalade EXT. But three years ago, the economy purring, it all made sense. Both companies wanted to make a statement. And in the Navigator and the Chevy Avalanche, both could borrow talent from the home team. There was no way to know that come 2002, 50 grand would seem a bit pricey for a spit-shined crew cab with a small, covered bed out back.

At their core, these vehicles are about luxurious flexibility. They’ll do what you want when you want-transport four passengers in the cab, carry gear in an open bed, secure belongings in a covered “trunk”-and coddle in the process. To find out who’d buy such a vehicle, we went in search of truck and SUV owners who might have a need. This quest took us to a Sports Car Club of America event in Virginia, to which amateur drivers tow their racecars.

The racers’ verdict mirrored our own: The limited-production Lincoln is for show (slow sales back this up), and the versatile Cadillac is for go (and, despite the price, they’re selling fast). The Blackwood earned high marks for its fake wood siding and power-operated bed cover. But because the cover can’t be removed, oversize items-and even smaller stuff like coolers and toolboxes-don’t fit. Also, most squirmed at the idea of loading plywood onto a carpeted bed.

The EXT, by contrast, seems downright utilitarian. Scoring high marks: the rubber-lined bed, removable rigid bed cover, and Avalanche-inspired midgate that extends the bed into the back seat when the cargo is extra-long. The one consistent negative was styling. Some called it homely; others thought it simply looks too much like the Avalanche.

On the road, the Cadillac’s bigger engine gives it the edge in acceleration, while its well-tuned suspension outshines that of the truckish Blackwood. The rear-drive Lincoln, however, gets better fuel economy and can tow more (by 700 pounds), mostly because it lacks Cadillac’s heavy full-time all-wheel-drive system. Neither truck’s interior justifies such a large price tag, despite efforts to distinguish each from their truck brethren.

The bottom line: The EXT is versatile and comfortable, as advertised. If you have money to burn, and Cadillac’s “art and science” design philosophy doesn’t enrage you, there’s no reason not to consider it. Meanwhile, the Blackwood’s time is running out-Lincoln will discontinue it early next year. If you’re looking for a collector’s car, this is your chance, as only 860 of them had been sold at this writing.

* Weight divided by torque; lower is better
** As measured by Road & Track”