The eight-wheel armored Stryker is hereâ€”and we're the first to drive it. 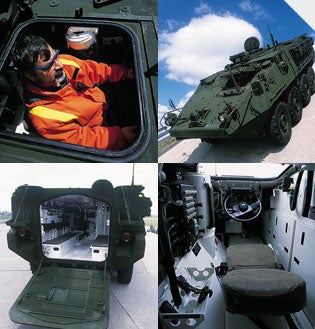 STRYKE A POSE Clockwise from top left: Driving instructor Dave Bennett; descending a 60-degree grade;the driver’s seat; up to 11 soldiers can deploy from the back.

Just in case you missed it, the U.S. Army changed forever on March 8. That’s when the first eight-wheel armored Stryker rolled off an Ontario assembly line. In the future, instead of waiting weeks for 70-ton Abrams tanks to arrive by sea, soldiers anywhere in the world can count on transport planes to deliver 19-ton Strykers in just four days. In May,
on behalf of Test Pages, I became the first civilian to test-drive the Stryker, at the London, Ontario, test track of General Motors Defense Ltd., which is building it jointly with General Dynamics Land Systems.

The majority of the 2,131 Strykers to be built over the next six years will hold 0.50-caliber or 7.62mm machine guns, or 40mm grenade launchers. One of the variants will even mount the same 105mm cannon found on the M-1 Abrams tank. Like a Humvee, the Stryker can crawl over 23-inch walls, and like the Abrams, it can leap 6.5-foot trenches.

Climbing in through the rear hatch, the first thing I notice are the fire-extinguisher nozzles throughout the 11-passenger compartment: They are the size of shower heads. Should a rocket-propelled grenade find its way past the inch-thick ceramic-composite armor, quarter-inch steel body, and half-inch Kevlar liner, sensors would trigger the extinguishers to douse the flames within 100 milliseconds. After buckling the racing-style seatbelt, I flip the starter toggle switch, and the steel-encased 350-horsepower Caterpillar turbodiesel beside me roars to life, clattering like a bulldozer. Its power is transferred to all eight wheels via a 6-speed automatic transmission-with the shifter lifted from the Pontiac Bonneville.

I put the $1.5 million Stryker in drive and we’re rolling . . . slowly. Twenty-five seconds later, we hit its 60-mph top speed. The ride is cushy, thanks to a long-travel pneumatic suspension and a chassis made ultrastiff by 1,160 feet of computer welds on the 160 steel body panels. Power assist makes turning easy-it drives like a Suburban, though it’s 4.5 feet longer and 2.5 feet wider. There are even rear antilock brakes. Controlling the Stryker actually isn’t as difficult as seeing where I’m going. Instead of windows, the driver gets three rearview-mirror-size scopes-it’s like looking through Sony Watchmans.

As we near a 60-degree grade, Dave Bennett, my driving instructor, tells me to shift into low gear; I flip a switch marked with a turtle. Back on flat land, I hit the “high” button-there’s a rabbit on it. It’s a modicum of humor inside an utterly serious machine.