Car '54 knows where you are: previsualizing Spielberg's psychic hot rod. 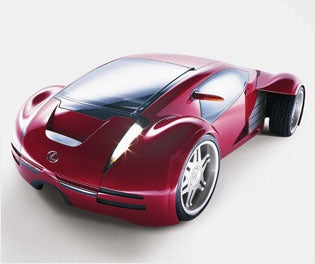 By the way, this is the front.

In Minority Report, the Steven Spielberg thriller that opens June 21, Tom Cruise plays a police detective who bombs around Washington, D.C., in a red clamshell-shaped Lexus, tracking down future criminals. The year is 2054, and Precrime, a psychic technology that enables “previsualization,” makes it possible to identify and punish killers before they strike. Precrime advocates promise a zero U.S. murder rate within six years. Now picture this: Someone’s accused of murdering a person he hasn’t yet met.

Fuel cell drives a 670-hp electric motor. Plausible, though breakthroughs in fuel cell or hydrogen storage are required. 670 hp beats that of an Indy car.

Laser-guided cruising. A precursor has been studied in California: Magnetic pins embedded in the road enable cars to cruise at highway speeds while driver writes film script.

Infrared system intervenes to prevent collisions with fixed or moving objects. Certainly possible, but likely a decade away.

Controls responsive to voice and gestures. Jaguar and others offer voice recognition. But gestures? Don’t give a driver the bird.

Body color changes to suit mood or attire. Distributing color within the composite is no problem; making it variable is not so simple; previsualizing a color to go with your mood and your clothes could be a nightmare.

Back to the Future, 1985
At 88 mph, Michael J. Fox’s DeLorean, equipped with a custom “flux capacitor,” created a gateway through time.

Blade Runner, 1982
Harrison Ford’s futuristic cop car was inspired by the vertical takeoff and landing capabilities of the Navy’s Harrier jet, but built around the chassis of a VW Bug.

The Spy Who Loved Me, 1977
James Bond thwarts nuclear Armageddon, again, with a Lotus Esprit doubling as
a submarine. A submersible was outfitted with an Esprit’s body panels for the stunt.