Senior Editor Bob Sillery looks back at a $1 million behemoth that had an 11-foot-diameter head and could bore through 400 feet of rock a day. 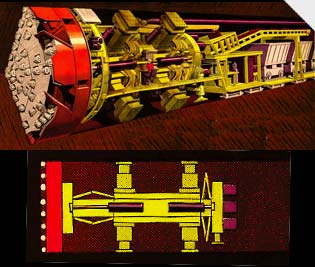 Monster Rock-Boring Moles
Investigating a new type of rock-boring mole (top; and, below, at the end of boring cycle), Popular Science‘s Rob Gannon joined the crew of the 175-ton, 1,105-horsepower monster as it gouged out rock as quickly as 400 feet a day, some 70 feet under Rochester, New York. An efficient way to dig a tunnel, he reported.–August 1973 Gannon, whose first story in Popular Science appeared in 1959, continues to exercise his go-anywhere, do-anything type of participatory journalism on our pages. In his 112th and most recent feature story, Gannon stepped into an astronaut’s shoes for simulation training at the Johnson Space Center in Houston (“A Walk on the Wild Side,” May).

In the world of power, there’s big, and then there’s monstrous. Back in 1973, our try-anything reporter, Rob Gannon, sat inside a 175-ton, 1,105-horsepower tunnel-boring machine made by Ingersoll-Rand as it chewed through 5 1/2 miles of hard siltstone and shale to dig a sewage tunnel beneath Rochester, New York. That $1 million behemoth had an 11-foot-diameter head and could bore through 400 feet of rock a day.

Today, so-called mechanical moles are no longer a novelty but rather the tool of choice for most underground civil engineering projects. The machines have become heavier and more powerful in the past 30 years, says Dennis Ofiara of the Robbins Co., a tunnel-boring machine manufacturer in Solon, Ohio. For example, the $10 million, 5,000-hp Robbins machine that dug the Manapouri hydropower tunnel in New Zealand in 2001 weighs 925 tons and has a 33-foot-diameter head. Another such machine, built by NFM Technologies in France, has a head that’s 49 feet in diameter. Bigger machines, longer tunnels: the triple-tube Chunnel beneath the English Channel, which took 11 massive machines seven years to dig, is 32 miles long.