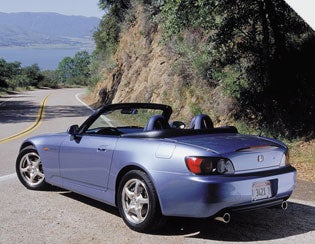 Large engines are taxed heavily in Japan, a crowded country that offers few opportunities for speed, so don’t look for a 500-horsepower Lexus anytime soon. But that doesn’t mean Japanese powerplants don’t pack a punch. In fact, Japan exports the engine that produces the most power for its displacement: The Honda S2000’s 2.0-liter 4-cylinder makes a remarkable 240 hp without supercharging or turbocharging. It simply spins faster. Jeremy Hall, a principal engineer in Honda’s engine design department, notes that the S2000’s power peaks at 8,300 rpm, and the engine has a race-inspired 9,000-rpm redline. The key is meticulous engineering and production-the stress on an engine at 9,000 rpm, he says, is double that at 8,000.

Like the Porsche GT2, the S2000 uses variable valve lift and timing to augment torque across the rpm range. By contrast, a conventional fixed cam has a useful range of only about 3,000 rpm. “If you were to drive only with high-rpm valve timing,” Hall says, “low-end torque would drop off.” Without low-end torque, the S2000 might do fine on the racetrack but stumble during everyday driving. So variable valve timing effectively gives the S2000 two engines in one.