The PopSci Car Test: For years, BMW's 3 Series was the fastest gun in town. Now Infiniti and Cadillac ride in. 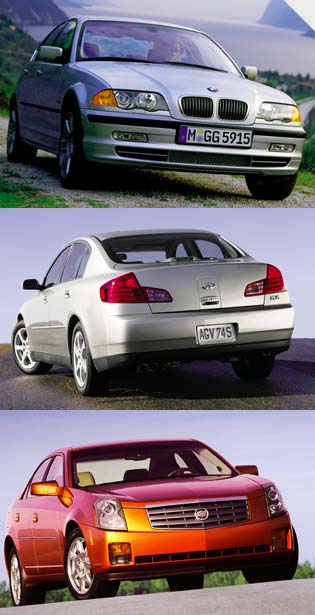 THE STANDARD BEARER (top)
The BMW’s cockpit is immediately familiar, offering the driver a sense of tranquility and control. THE ENTHUSIAST UPSTART (middle)
Criticized for the lack of power in its previous-generation G20, Infiniti’s put a class-leading 260 horsies in the G35’s stable. THE CURIOUS CADDY
The angular CTS marches to its own drummer, but doesn’t miss a beat in the corners.

The trouble with being a fast gun is that some young gun’s always trying to outdraw you. The latest two to challenge BMW’s sport sedan supremacy are the Infiniti G35 and Cadillac CTS. “Cadillac!” you say. Wipe off that smirk. This is serious.

At first, the Infiniti and Cadillac seem an unlikely combo: one Japanese, the other possibly Martian. But both are trigger-happy-and the BMW 3 Series is as flinty as ever.

As proper sport sedans, all are front-engined and rear-drive, with traction control when things get slippery. The BMW’s 225-horsepower inline 6-cylinder matches up with two V6s-the 220-hp Cadillac and the torquey 260-hp Infiniti. For now, the Infiniti is available only with a 5-speed manumatic (that is, you can select gears manually or let it shift for itself). We chose Cadillac’s 5-speed manual-the first Caddy stick since Maude died-and, to be different, BMW’s 5-speed manumatic. Then we lined them up in the street and stood back.

At a glance, the Infiniti seems bigger . . . and it is roomy and airy. The dashboard and instrumentation are pleasing, if stark, but the audio and climate controls are reversed: primary controls on the right rather than closest to the driver, apparently unchanged from the right-hand-drive Japanese model. Our G35 had a sport suspension, and combined with the strong engine, it is a forceful sedan. Some of our testers complained of lumpy manual shifts, but all agreed the G35 didn’t “feel” as quick as the BMW, despite faster 0-to-60 times. All in all, a fine sport sedan that’s also a bargain.

Initially, the Cadillac CTS’s styling set us back, but why not be different? Suggestive of the F-117 stealth fighter, it’s all angles and edges, yet the bulky, vaguely claustrophobic interior still communicates Cadillac-ness. Its instruments are stylized but nicely done, though there is an analog clock where the water-temp gauge ought to be. Wrong choice in a sport sedan. The CTS is the heaviest of the three, and has the least powerful engine, yet it gets to 60 mph in a respectable 7 seconds-most of our testers, however, said it felt slower. Clutch takeup and the 5-speed manual transmission are superb, and this car’s cornering behavior is nearly the match of the BMW-it’s easily the best-handling Caddy ever.

Anyone interested in sport sedans knows BMW’s credentials. Its styling, stationary for decades, is approaching staleness, but this look has come to mean speed, verve, and pleasure. BMW clings stubbornly to the inline six, and we all marveled at its glass-smooth power delivery-like an electric motor, one said. The 330i interior is “German standard,” by now virtually intuitive. And if the 330i is a tick slower than the Infiniti, only the stopwatch knows it. This car is keen-spirited, enthusiastic, on the edge of its chair awaiting the next command.

These are three fine sport sedans, all quick out of the holster. The roomy Infiniti has strong performance. The Cadillac heads off in its own direction, waiting to see who will follow, setting a new standard for the marque. And while there are crow’s feet around the aging BMW’s eyes, everyone agreed it remains the archetype . . . all around, still the fastest gun in town. Just not as far ahead anymore.

* Weight divided by torque; lower is better.
**With manual transmission-7.3 with automatic.
***As measured by Car & Driver